HomeBlogCanadian National Parks Free In 2017 For 150th Anniversary Of Confederation

Backpackers.com — Universal health care and a year of free national parks? Canada is bringing it hard.

The liberal government, led by Canadian Prime Minister Justin Trudeau, debuted this initiative as part of the 150th anniversary of the Canadian Confederation. In short, Canadian National Parks will be free for every citizen in 2017, and permanently free for children under the age of 18 from now on. Likewise, anyone that moves to Canada after 2017 will receive a free year pass to Parks Canada.

Got to love nature … and Canada.

The amazing part of this initiative, apparently part of a number of projects that will take place for the 150th anniversary, is how quietly Canada let its citizens know about it. There weren’t any grand announcements (at the time of this writing), just a small note that was sent with the annual Parks Canada pass. It said,

“You will be pleased to find that your 2016 Parks Canada Discovery Pass is valid for a full TWO years, rather than the typical 12 months. This is the first step towards free entry in 2017 to celebrate the 150th anniversary of Canada’s Confederation. Eperience Canada’s nature and history has never been easier.”

The details of the situation are now on the Parks Canada website where you can purchase an annual pass. Normally, an adult single pass is $67.70, a group pass (up to seven people) is $136.40, and entry to an individual park is $9.80. (All prices listed here in U.S. dollars.)

With an entire year of free parks to look forward to (next year, not this one, unfortunately), here are some great National Parks in Canada to whet your appetite. There are a total of 38 proper National Parks  (and over 100 areas that will be free), which means plenty of land to explore. Here are five of the best (subjectively, of course) with descriptions by Parks Canada:

“These are the western slopes of the Canadian Rocky Mountains. Towering rockwalls, spectacular waterfalls and soaring peaks earn the park its name; Yoho is a Cree expression of awe and wonder. Here in the shadow of the Great Divide are the secrets of ancient ocean life, the power of ice and water, and the stories of plants and animals that continue to evolve today.” 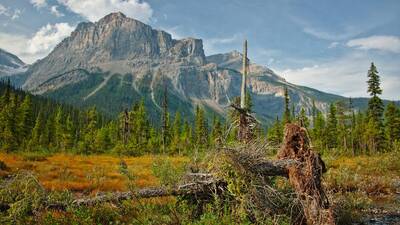 “Suit up in your storm gear and watch the winter breakers crash on a rocky shoreline, or enjoy a summer stroll along an endless sandy beach. Step out of your kayak to be greeted by a First Nation Beach Keeper, or hear ancient legends told around the campfire by Guardians of the West Coast Trail. Pacific Rim National Park Reserve offers a West Coast experience steeped in nature and history.”

“Dramatic cliffs rise from the turquoise waters of Georgian Bay. In large tracts of forest, black bears roam and rare reptiles find refuge in rocky areas and diverse wetlands. Ancient cedar trees spiral from the cliff-edge; a multitude of orchids and ferns take root in a mosaic of habitats. And the night is brilliant with stars in this Dark Sky Preserve”

It’s a good time to get outdoors.

Images in order: Wenkchemna Peaks and Moraine Lake, Valley of the Ten Peaks, Banff National Park, Alberta by M0sT_WaNteD via Flickr; Around the Emerauld Lake by Emmanuel Milou Follow via Flickr