Backpackers.com — Ah, the lovely scent of innovation. The California Hiking Map is an idea conceived and soon to be executed by Jason Mandly. The map is being created to showcase one thing: all the hiking trails in California.

As the story goes, Jason was looking for such a map so he could push pins into all the trails he’s hiked (as many of us do), and, after some research, found there wasn’t a single map that contained all the trails in California. 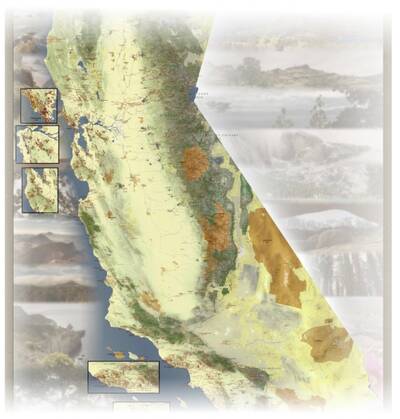 So he set out to make one. Below is a brief on the Kickstarter campaign, how you can purchase one of these awesome maps, and an in-depth interview with Jason himself.

The California Hiking Map has four days left of its Kickstarter run, and has received double the funding needed to complete the project. So, if you decide to chip in for a map (or five), you will most definitely be receiving one. The estimated delivery is in April of 2016, and Jason is currently hard at work finishing trails, designing the map itself, and talking to printers.

Now, to be clear, the pitch is “all the trails in California.” In reality, that’s not possible. The map has to be to scale, and some tiny trails wouldn’t be seen. Jason says on the Kickstarter how he established which trails would make it. They have to be:

Each California Hiking Map is 40 inches wide, 60 inches tall. We’re talking a full-wall map of the Golden State with every hiking trail you could dream of. And each map on the Kickstarter only costs $15, which, for the size, quality, and fact that its a community-based effort, is a steal. Jason recently uploaded an artistic image of every single trail (click to enlarge). 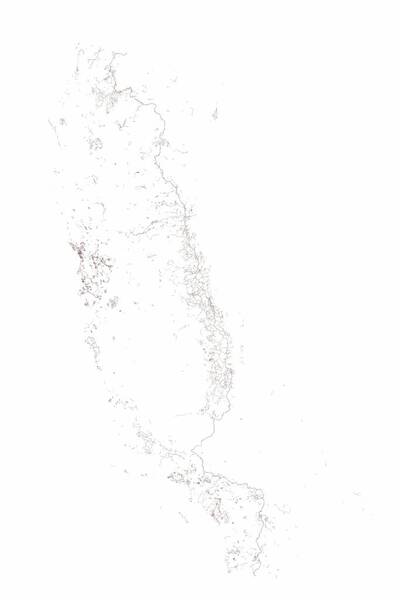 Here’s the video, and a chance to see Jason in person:

Here’s Jason on the California Hiking Map, his love of trails, and how this project unfolded.

Backpackers: What is your day job? How long have hiking and exploring been hobbies? What previous skill do you have in map-making, cartography, and trail-finding?

My love of maps started earlier than I remember. In elementary school I could draw out each state and mark major landforms and cities from memory. My introduction to hiking occurred in the White Mountains of New Hampshire. I didn’t do too much more hiking until I moved out to California to work at an Outdoor Science School. After hiking the San Bernardino Mountains with a bunch of kids, and then with my now wife, I was hooked!

I moved into the air quality field while working with the Morongo Band of Mission Indians. My boss there was a huge GIS buff so it inspired me to go back to school for a certificate in Geographic Information Systems (GIS). I learned just enough to be dangerous. I suppose my love of maps and of hiking were in separate worlds until this project. 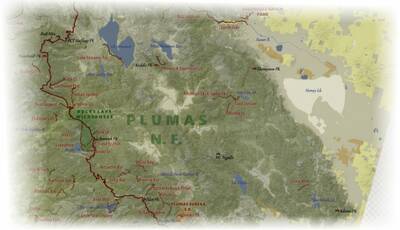 Backpackers: Can you detail the process of actually making the map? What combination of maps, satellites, etc. do you use to compile the trails? Are there any sources of information that surprised you during this process, and how so? Are you using/discovering new sources daily, or do you have a set routine at this point?

Jason: A lot of data is available to the pubic from the government if you look for it, such as USFS and NPS data. Calands.org is a great resource for parks and protected areas. I received their permission to use their dataset with citation for the basemap. I was able to get some help from several counties that tracked their local trails.

The majority of the trails though, especially in state, regional, and local parks, had to be digitized from maps or satellite imagery. I’m sure CA Department of Parks and Recreation has all the trail data somewhere, but I couldn’t find it, so there was a lot of re-inventing the wheel going on. This took over a year to do.

I pretty much started in Del Norte County and scoured for any publicly accessible trails that were of decent length (over 2-3 miles long). Once a county was done, I moved on to the next. I’m pretty much done with looking for new trails now, but I find some here and there that I’ve missed. There are also brand new ones like the Great Shasta Rail Trail that I try to incorporate into the map. 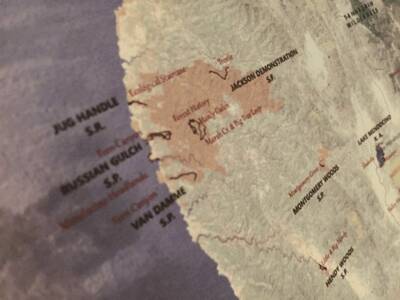 Backpackers: You’re in the stages of actually designing the map — how is this process for you? Do you have experience doing it, or are you learning as you go? What are your favorite kind of maps, and how will you model this one after those?

Jason: Mapping the trails was the easy part with this project. Labeling them so that the map is presentable on a 40×60 poster is the challenge. This is probably why it hasn’t been done before at this scale. Some areas, especially the urban foothill areas, are just so dense with trails. I’ve decided to create some insets on the map showing the most congested areas, so that will hopefully help. I want this map to look great on a wall, so I’m trying the bridge the balance of useful and attractive.

The Kickstarter backers have been a huge help with letting me know what they like. I’m a fan of Dave Imus’s works, especially his Sierra Nevada map. For trail maps, David Baselt has very attractive and easy to read maps. I’m also a fan of the attention to detail that Michael Jones puts into his maps.

Backpackers: You tried to fund the California Hiking Map in December. What happened that time around? What did you change (if anything) when you started up again this month?

Jason: As they say, if a tree falls in the forest and no one is around to hear it … My first round of crowdfunding was a learning experience for me. I’m normally not one to self-promote and it showed in the first effort. Most of my outreach efforts came after the first Kickstarter launched, so I didn’t have the momentum to keep it going. The feedback I did receive was very positive though, so I figured if I tried again (this time with feeling!) I would fair a little better. This time I tried to front-load my outreach efforts before I launched with help from awesome family and friends.

Backpackers: I love your prizes on Kickstarter. So often there are grandiose prizes that cost a ton of money, and less that normal people may actually want. I think yours are very balanced. How did you decide on these prizes?

Jason: Why thank you! The main reason why I wanted to crowdfund this project is so that this map could be available at a decent price. If you try to print a 40×60 poster individually they can be $40-ish a pop. Printing a large volume at once drops the price to something more reasonable. Obviously, the map itself is the most popular reward. I do want to make it very worthwhile to those that supported at a higher level. I can’t wait to assemble those rewards (especially the trip planning … I love that kind of stuff).

Backpackers: Favorite trails you have hiked that are on the map? Surprising trails on the map? Most difficult region to design?

Jason: There are so many trails that I have enjoyed (the main reason why I made this map … so I can track them all with pushpins and markers). A local favorite of mine is Thomes Gorge. Awesome views of the Northern Sacramento valley, including Mt. Lassen. Then you drop into a gorge with a huge rock wall and a great creekside camping spot.

San Jacinto Peak is special for me as it was the first kiss with the Mrs. The sprint back to the trailhead before we missed the last tram down the mountain was also memorable.

As far as surprises, I was surprised to see such a solid network of trails in and around urban areas. Some are bike trails, others are fire roads closed to vehicles, but you can do some huge long distance traveling in places like Orange County, Sacramento, and on the San Francisco Peninsula. These urban trails were also the hardest to design because they’re packed in tight and the land ownership/management changes every other mile. 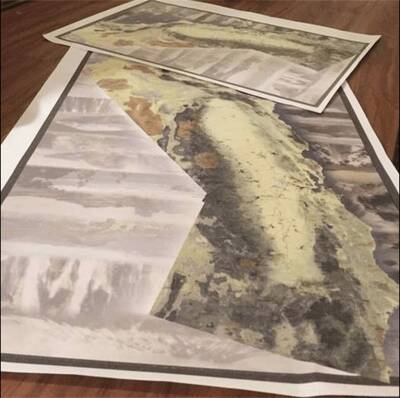 Backpackers: Have you settled on where/how you will print these? I see a number of printing options on Kickstarter, do you have a printer in mind, or any experience with getting these made?

Jason: I have assembled several quotes already and will likely assemble a few more. I am trying to keep printing within California. There are not too many places that can offer offset lithographic printing of a poster this size.

Backpackers: What has the community reception been like, and how do you like working with Kickstarter? Has it put you in touch with outdoor organizations and companies in a positive way?

Jason: I’m happy that I was able to be introduced to you! I’ve also had a chance to talk trails with some folks on the project’s Facebook page. I’m a hiker and backpacker with the Chico-Oroville Outdoor Adventure Meetup group and I have had a lot of support from the group’s organizer and some of the members. The folks I hike with in that group keep me inspired to keep on exploring too, which is great. I haven’t really chatted with anyone from Kickstarter, but I wouldn’t mind doing so!

Backpackers: Will the maps continue to be available for purchase through Kickstarter after the campaign? If not, how will you go about selling them?

Jason: After Kickstarter and fulfillment, I will need to make some other way available to obtain a map. When I figure it out, I’ll communicate it on the Kickstarter page as well as the project’s Facebook page. I do have www.californiahikingmap.com in reserve … but right now it’s an empty room with that fresh paint smell. More on that later!

Additionally, I’d like to thank to my wonderful wife and daughter for letting me work on this for years! Also, thanks to those that have backed this project and are helping bring it to life!

As you can tell, Jason is a stoked hiker living out a solid dream. And, as the last question here reveals, if you want one of these, you should purchase before the Kickstarter is over. Who knows how long it’ll be before you can grab a California Hiking Map?

See the Kickstarter, connect with Jason on Facebook, and get yourself a California Hiking Map!