Backpackers.com — #OptOutside rocked the backpacking world this year. REI gained over 1,000,000 official supporters, and was backed by a slew of outdoor companies and government bodies alike. All this adds up to a surge of people that got outside on Black Friday. 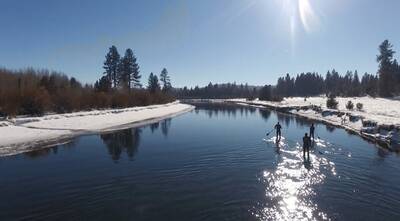 Last week the trailer for “#OptOutside, The Short Film” went up on Vimeo, and it looks like a fun one. The company set out in Central Oregon for a day of paddle-boarding through rivers and lakes, serious mountain biking through snow-caked lands, and even some snowboarding.

We’ll highlight the full film when it comes out, but wanted to share in the celebration that was #OptOutside while it’s still so fresh on everyone’s mind. Enjoy!