Backpackers.com — The news broke on February 1, 2016 — the Great Bear Rainforest in British Columbia, home of the legendary “Spirit Bear,” is now subject to the “most comprehensive conservation and forest management achievements of this scale on Earth.”

The battle for the Great Bear Rainforest began in the ’90s when the First Nations Heiltsuk people were disturbed with the amount of old-growth timber logging in their ancestral home. Many companies (like Ikea and Staples) used the timber, and the Heiltsuk invited representatives of those companies to see the devastation occurring in the forest. 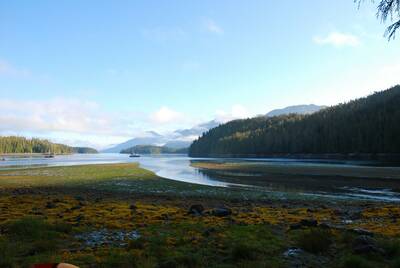 Over time multiple agreements to reduce logging were reached, but standards were not met, or the First Nations people of the area were not included in a sustainable way.

According to the Ecosystem-Based Management (EBM) statement released by Rainforest Solutions Project, many of these obstacles have been negotiated. The supporting environmental partners include ForestEthics Solutions, Greenpeace, and Sierra Club B.C.

The agreement addresses many of the previous issues.

The First Nations people living in the Great Bear Rainforest area have shared decision-making power over land use in their territories and there are legal requirements for the maintenance of cultural, ecological, and economic areas important to them. They also have increased economic opportunities from the logging that will be allowed, like revenue sharing and access to timber.

The agreement states that 85% of the Great Bear Rainforest will be preserved completely, allowing the old-growth forest to remain that way. The other 15%, constituting 550,000 acres, will be logged “2.5 million cubic meters per year for the next 10 years, and on a conservation trajectory after that.” 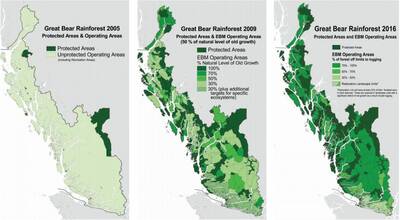 So, logging itself has not been outlawed. But the increase in protection is significant, with 3.1 million hectares now off-limits. The part that will be logged will be “subject to the most stringent commercial logging legal standards in North America.” (The release does not yet indicate what that means.)

The Globe and Mail provides an in-depth look at the history of this movement, and the celebratory signing of the deal.

For those drawn by those illustrious words, “Spirit Bear,” we thought we’d dish out a little info. This creature, known officially as the Kermode Bear, is a subspecies of American black bear, and is famous for the cream color of its coat. 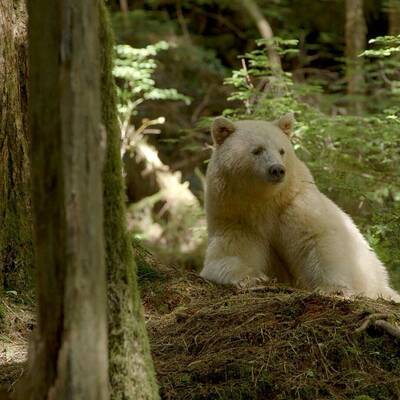 The Kermode Bear calls the Great Bear Rainforest home. Its population is estimated to be less than 1,300, and hopefully this new agreement will keep those numbers level, if not allow them to increase. Only one in ten bears have this color in Great Bear Rainforest area, making it quite rare. According to BearLife.org, the Spirit Bear has significant meaning for the First Nations:

“According to Native American legend, the spirit bear is a reminder of times past, specifically the white color of ice and snow. The master of the universe created one white bear for every ten black bears as a reminder of the hardships during the ice age. During this period glaciers and cold blanketed the planet. The spirit bear also symbolizes peace and harmony.”

This video by photographer Paul Nicklen shows how hard it is to see the Spirit Bear, and provides some great anecdotal footage of his encounter.

Another well-known photographer of the Spirit Bear and Great Bear Rainforest, Ian McAllister, said of this historic environmental agreement in an interview with The Globe and Mail:

“There is no skirting the issue: This agreement proposes to log 2.5 million cubic metres of old-growth forests every year for the next 10 years … The campaign was to stop ancient-forest logging. Unfortunately this agreement enshrines the idea that ancient-forest logging is part of doing business in the Great Bear Rainforest. That’s been a significant change in the conservation movement.”

So, while it is historic, certain compromises were made. Clearly. We can only see how this agreement unfolds, and hope that all parties adhere to the strict guidelines set for them. Hopefully this means a long lasting future in which the Great Bear Rainforest, and the spirit bear that resides within it, is protected.