Product Details for Cerium LT Down Hoody Men’s from Arc'teryx

Cerium is the most abundant rare earth metal. It decomposes slowly in cold water and rapidly in hot water. The Arc'teryx Mens' Cerium LT Hooded Down Jacket is not quite as prevalent as its namesake, but it does slow your decomposition in cold weather. The combination of 850-fill goose down and strategically placed Coreloft insulation keeps you warm during bone-chilling days in the backcountry. While Coreloft insulation does resist moisture better than down, and an ominous drizzle won't leave you a cold, soaking mess, it's best to pair this with a waterproof shell if you know wet weather is coming. This superlight hooded jacket comes with its own stuff sack so you can easily bring it along on your next ski tour.

Other Products by Arc'teryx 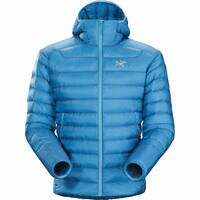 Backpackers.com is not associated with Arc'teryx, and both their name and logo are their trademarks respectively.

Links to external sites on this page may earn Backpackers.com an affiliate commission, which goes towards supporting our team.