Backpackers.com — Yesterday, May 26, 2016, was a celebration of sorts. Not only was it the Thursday before Memorial Day weekend, but it will be remembered as the day the Backbone Trail in the Santa Monica Mountains was completed. Never heard of the Backbone Trail? No worries. That’s because it has been an idea and not a full trail for the last five decades.

Keep in mind that “complete” does not mean “hike-able”. The trail still needs a fair amount of work before the public can thru-hike officially.

The Backbone Trail is a 67 mile stretch of trail that extends from the Ray Miller Trailhead in Point Mugu State Park to the trailhead in Will Rogers State Historic Park in Los Angeles. For those not familiar with Southern California geography, this means a decent thru-hike now exists from the legendary Pacific Coast Highway in Ventura County all the way to heart of Santa Monica and Los Angeles.

History of the Backbone Trail

As they say, it takes a village. The often debated 67 mile idea has cut through a huge number of public and private lands over the years, and only as the State Parks were established did the potential for this trail become a possibility. The National Park Service (NPS) has worked with the California Department of Parks and Recreation, the Mountains Recreation and Conservation Authority, and the Santa Monica Mountains Conservancy to gather the land necessary as it became available. For the last few years 65 miles of the Backbone Trail were hike-able and in the right hands.

The trail was still incomplete, though, because of a three small plots of land that the trail winds through, all of which were owned privately. Two of those three, parcels along the Etz Meloy Motorway, were recently purchased by the NPS, who expects the escrow to close within the next 10 days. The final chunk is a 40-acre plot of land that was donated to the NPS by Arnold Schwarzenegger (former Terminator and California Governor — in that order) and Betty Weider, a fitness pioneer.

“The three new properties are among 180 individual tracts that have been purchased since the 1960s,” writes the LA Times, the organization that originally broke this story. 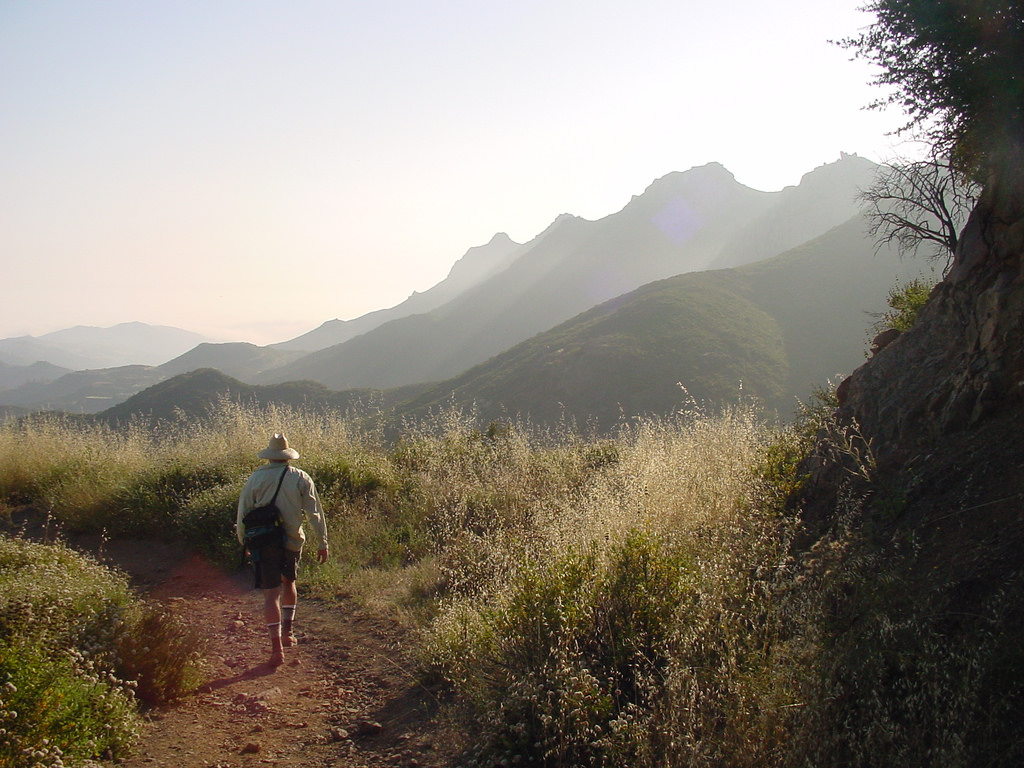 Impact of the Backbone Trail in the Santa Monica Mountains

Los Angeles is known for its cars, smog, and concrete sprawl. It’s the mecca of entertainment and one of the most populous cities in the U.S. Many people aren’t aware of the natural beauty and trails that surround the Los Angeles area, and while the Backbone Trail was never technically complete, much of the this area has been hike-able for many years.

This trail, in addition to nearby destinations like Angeles National Forest, Mount San Antonio (referred to as Mount Baldy), and Joshua Tree National Park, further cements the number of outdoor activities in the Los Angeles area.

The real impact of the Backbone Trail, however, is the option of a thru-hike so close to Los Angeles, the surrounding cities, and Ventura County. For those who want to experience a solid thru-hike, or even a decent multi-day backpacking trip, you typically have had to drive a number of hours into the desert or mountains to fulfill your desires. You should absolutely still do that, but the Backbone Trail will make this a possibility practically within the city limits of Los Angeles. This is all future planning, though, because at present the Backbone Trail is not open to thru-hiking. The trail was just completed; the NPS will now begin the process of maintaining this trail as both a legitimate thru-hike and a place for people to “wilderness camp” (as they like to call it).

“We want to create a small number of backcountry campsites for use with permits. Right now, we as the National Park Service only operate one camping spot in those mountains … It’s our goal to start making thru-hiking a reality for more people.”

And the LA Times writes:

“The park service is seeking designation of the trail as a National Recreation Trail, one of 1,500 in the country acknowledged for their value in promoting health, conservation and recreation. The title will make the trail more of a national destination and help the park service secure additional funding for maintenance and other acquisitions.”

All of this planning can now come to fruition with the entire length of the Backbone Trail in the hands of participating state authorities.

The Lay of the Land

While thru-hiking is not yet an option, day-hikes and extended tours of the area have been possible for many years.

For the most part this trail treks through the Santa Monica Mountains National Recreation Area, which has an abundance of coastal sage scrub, chaparral, and oak woodlands. The chaparral and scrub is most common, and there are few areas with a lot of trees. The climate and ecosystem is decidedly Mediterranean, so expect warm temperatures and a fair amount of wildlife, including mountain lions, coyotes, eagles and hawks, and rattle snakes. The entire trail runs parallel to the Pacific Ocean, so those hiking the Backbone Trail will be able to meditate consistently on the great blue horizon.

Here are some great resources to get started:

This is a celebratory time for the Los Angeles area, and for outdoor folk everywhere. The 67-mile Backbone Trail is complete, and in years to come it will serve as an excellent starting point for hikers, campers, backpackers, and thru-hikers.