Backpackers.com — It’s a big year for the National Park Service (NPS). Why? For those out of the loop, or the cave-dwellers who check the Internet in between 6 month adventures, you may have missed that 2016 is the centennial anniversary for the NPS, which was founded in 1916.

There are a number of projects under way to commemorate this achievement. Ongoing programs like Find Your Park add to the fray of celebration, but coming up is a whole week of free National Parks.

Every single one of you could walk right into a National Park next week — into the wild, as it were — free of charge. Here’s the promotional video by the NPS.

The NPS typically has a number of free park days in a given year, usually for major holidays like Martin Luther King Jr. Day and Veterans Day. This sort of access is great, and gets widely publicized by the NPS because they want you to come to a park.

The reality is that there are 400 National Parks and areas (including monuments, preserves, etc.), and only 127 of them require a fee. But those 127 are the biggest National Parks in the U.S., and the ones most people will want to go to. National Parks like Yosemite, Yellowstone, and Grand Canyon typically charge $30 per vehicle, and these free days turn some of the most breathtaking places on the planet into fee-free zones. 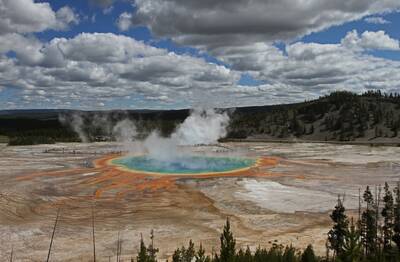 The National Park Service is really stoked on its 100th birthday. It’s showing none of the typical signs associated with old age, and instead is in the upswing of increased visitation and outreach in communities across the country. According to a NPS Press Release, 2015 saw a record-shattering 305 million visitors to National Parks. NPS Director Jonathon Jarvis stated,

“The increasing popularity of our national parks comes as we are actively reaching out to new audiences and inviting them to explore the depth and breadth of the national park system.”

This is referring specifically to the Find Your Park campaign, which has engaged social media and other platforms to increase the exposure of what is considered America’s best idea. This campaign has in turn resulted in increased notice from Congress, which in December 2015 approved a nine percent increase to the NPS budget. This is mostly to deal with the influx of visitors and keep the services as high quality as possible.

It’s a win-win situation for the government and outdoor folk, because there is nothing quite like the wholesomeness and beauty that comes from the outdoors. This platform also extends to those who would not normally participate in outdoor activities, and helps to educate communities across the country.

National Park Week kicks off on April 16, Saturday, and runs all week. There will be a huge number of special events at every National Park throughout this week. Here are few of the official events, taken from the NPS site:

These are just the big ones. NPS encourages you to check the park you plan to visit, or parks in your area, to see what kind of events will be taking place. You can visit the National Park Week website (yes, there’s a dedicated website!) to see the full range of events and ways to participate. A massive list is available on the calendar page, which can be dialed in to your specific location.

This week lines up with some spring breaks for schools, so it may be the perfect family getaway. Even if you’re slammed with work, school, or life, getting out on a single day to one of these parks is a good idea. Enjoy the outdoors, and the celebratory spirit of the National Park Service foundation.