Backpackers.com — The John Muir Trail (JMT) is an iconic thru-hike in the U.S. At 210 miles, it won’t take nearly as long as the PCT or ACT, but contains the rugged wilderness one would hope for in a backcountry experience.

There are a plethora of trail stories, videos, and articles on the JMT — we’ve highlighted one before — but we found a video that took a unique approach on the trail. Below you’ll find HitTheRoadZak’s JMT experience, documented with a second of video for every mile of his trip. The quick scenes become hypnotizing, and you can see epic views from the entire length of the trail in under 10 minutes. It’s also a northbound trip, which is the less-traveled route, and thus refreshing in its documentation.

We got in touch with Zak and his travel partner (known only as Pancho Libre) to get full details on the trip, their gear, and their approach to backpacking. They are funny dudes with a wealth of easy-going information, especially for those considering this hike. Check out the video and interview below.

Interview with Zak and Pancho Libre: The John Muir Trail in Minutes

Backpackers: Who was your travel buddy, and do you guys go on hikes often?

Zak: The guy in the festive Mexican hat? That’s Pancho Libre … I’m Hot Cheeks … Together we make a pretty good idea for a fusion restaurant (credit to the guy on the trail for that one). Before the JMT we went on a couple day hikes and one backpacking trip around Yosemite and up Half Dome. 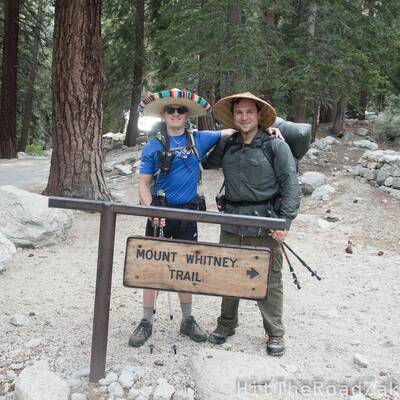 Backpackers: Can you talk some about your experience with backpacking, nature, and why you chose to do the JMT?

Hot Cheeks: I grew up in the Midwest where there are endless expanses of flat soy and corn fields broken up by symmetrical grids of perfectly orthogonal country roads. I enjoyed some camping when I was in Boy Scouts, but lost interest in my teens. There are so few large areas of public land in the Midwest, and there’s not a lot of diversity in public nature areas, so there was little to inspire me to explore further.

I moved to California about three years ago and saw mountains for the first time. It was love at first hike. Changes in elevation were so exotic. I was inspired to hike every hill I saw. There were so many national parks, and national forests, and national monuments, and wilderness areas, and bureau of land management (BLM) areas, and state parks, and local nature preserves within a few hours of scenic driving. I filled every weekend I could with exploring.

This quickly lead to an interest in photography to share the beauty of the world with all of my friends and family back in the Midwest. It has inspired multiple international trips primarily focused on hiking and nature. It rekindled my appreciation for camping, which inevitably lead to backpacking. My early backpacking trips were in Sequoia National Park and Mount Whitney. When I saw the Great Western Divide from the start of the High Sierra Trail in Sequoia I was enamored by the Sierra Nevada. When I was hiking Mount Whitney and I reached the Trail Crest and gazed into the thousands of square miles of uninhabited terrain, I knew I had to explore further. When I learned of the John Muir Trail it immediately became something I had to do. I’m so glad I did. 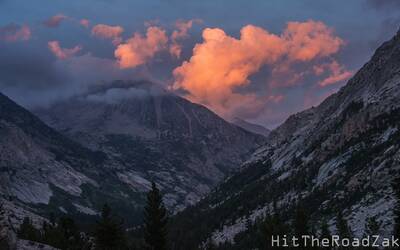 Pancho Libre: I’ve been hiking in the Sierra and the Big Sur wilderness since childhood. I got away from it for most of my teenage years, but rediscovered the outdoors in my early twenties. My first backpacking trip on my own, I carried a hatchet and three pair of blue jeans. My pack weighed at least 70lbs. I’ve cut that down a bit. I’ve done a lot of short trips in the Sierra and the southwest, but the JMT was always a goal. I attempted it SOBO in 2012, but left the trail at Reds Meadow due to an infection from blisters. That sort of unfinished business doesn’t sit well with me, so I had to give it another go.

Backpackers: Why did you choose the northbound (NOBO) route over southbound (SOBO)?

Hot Cheeks: We tried to go SOBO but were getting rejected for every application we tried (as happens to most). After a few days we abandoned that idea and decided NOBO would be a lot easier. On the day that the unused Whitney lotto permits were released at random times throughout the day we were able to snag a couple easily. The rest is history. If that didn’t work out we were intending to grab a couple permits for Horseshoe Meadows since there are no lotto systems to deal with.

Backpackers: The intro to this video is wonderful. What program did you use to make it?

Hot Cheeks: I’m glad you enjoyed it! I used Google Earth Pro to make the video of the terrain. That pro version of the software became free in 2015, and there’s a built-in Movie Maker in the tools. I use that software all the time to plan hikes and determine the best camping and photo destinations. Awesome stuff. To add text and animations and piece everything together I used Adobe Premiere Pro and Adobe After Effects. It’s the first time I’ve edited video, so I’m not sure how it compares to other video editing software, but I am thoroughly impressed with it.

Backpackers: What camera system did you use for the trip? How many hours of footage did you have total?

Hot Cheeks: My camera is an Olympus OM-D E-M5. It’s a great micro 4/3 weatherproof camera, but it goes through batteries like no camera I’ve used. Video was mostly shot with a weatherproof Olympus 12-50mm lens that came stock with the camera body. I ended up with over two hours of video and over 2,500 photos, consuming about 60GB of micro SD card space. One of the biggest challenges I faced was keeping batteries charged. I brought a solar charger and 3 batteries, but the cloudy days and technical difficulties resulted in less than stellar charging performance. I was shuffling near-drained batteries to keep video going for a lot of the trip. The charging stations and friendly camp neighbors at Reds Meadow saved me from that agony for a few days.

Backpackers: One of the biggest draws of this video is the mile-by-mile footage account. How did you manage to be accurate with that?

Hot Cheeks: I was carrying a GPS with me. I’d pull it out of my pocket occasionally and if a mile passed I took a few seconds of video. Sometimes I’d get a better view a quarter mile later so I’d take another few seconds. When I got home and sifted through the 650 clips and two hours of video with my trail map by my side I pieced it back together with my favorite one second of each mile. 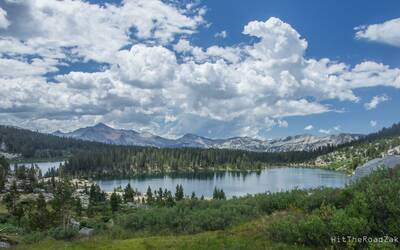 Backpackers: How did you think to do such a clipped video?

Hot Cheeks:  I was trying to think of something special to do with my camera on the trail to document the journey. I was coming up with nothing. Then within the first mile of hiking the idea came to me to record one second of video per mile. This was my first time using my camera for video so I wasn’t fully prepared, but I learned a lot. I’m glad you enjoyed it! When I was putting it together after I got home I was reminded of a video I saw years ago where a person recorded one second of video for every day of their life, and another where a guy took a selfie photo every mile of the PCT. It could be that those resonated with my subconscious and inspired me.

Backpackers: Was there a high point of this trip? A particular memory that stands out?

Hot Cheeks: Mount Whitney is definitely the highest point of the trip, and the contiguous US, at 14,505 feet. Seriously, though, there are so many high points from the trail. The miles and miles of some of the best scenery in the world, the people we met on the trail, the millions of stars clearly visible in the crisp night sky, the perfectly clear rivers and lakes, the best tasting water pouring directly from massive pieces of melting ice at mountain passes, and the list goes on. Each day was filled with doing something I love. I’ve never felt more alive. I’m grateful to have had this opportunity. Being on the trail also helps you better appreciate the things only available off trail, like at Reds Meadow where I had the best hot shower ever, and the 12 hours sleeping on a pillow-top mattress when I got back. 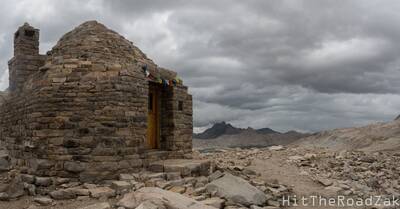 Another point that stands out is almost drowning in Thousand Island Lake. Remember, kids: no matter how warm the shallows feel, always acclimate before you race your friend across to the lake to the nearest island. The water in the deep parts is super cold and the heavy breathing required to race is very difficult to do when your body is involuntarily convulsing.

Pancho Libre: I think nearly drowning in Thousand Island Lake was a high point, from a certain point of view. It’s certainly been one of my stronger memories. Riding out a heavy thunderstorm at Marie Lake is up there too. I think I most enjoyed the trail up LeConte Canyon. We had perfect warm weather with big puffy clouds, and the huge views through the trees were just tremendous. Walking over Bear Ridge in a hailstorm was pretty great too. I just said F-it and hauled ass through the storm. It was a very visceral experience with the wind and hail and thunder and everything. My sombrero got filled with ice.

Backpackers: Can you give a brief overview of major gear?

Backpackers: You’ve had a lot of views on YouTube. How does that feel? What are people’s reactions? Are you going to do more videos?

Hot Cheeks: I’m so grateful to have received so much positive feedback on the video (and photos). When I first posted the video I had hundreds of very positive comments across my accounts. This was the debut video for the HitTheRoadZak profile that I created to share the beauty of the world with as many people as I can. My hope is to inspire others to get out there and explore as much of this planet as possible, just like the photos and videos I see inspire me. For those that are unable I’m honored to bring as much of the world as I can to them. 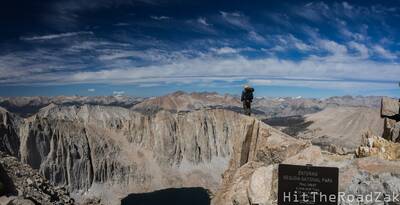 All of the positive feedback I’ve received is having exactly the impact I was hoping for, and I couldn’t be happier. I look forward to sharing the rest of the photos from this JMT trip, as well photos from Peru, Switzerland, Thailand, Cambodia, and all over the Western U.S. …

I do foresee more videos in the future. I’ve got another one similar to this one that I made as a tribute to a band that kept playing through my head when I hiked. I recently purchased a dual sport motorcycle to take me places my car can’t. I’ve been getting some ideas I’m anxious to try. I’ll always be posting photos when I don’t have the time to develop videos like this. I’m excited for what the future holds.