HomeBlogFilson Partners With Smokey The Bear 2

As part of Filson’s commitment to their customers and industry, the brand has partnered with Smokey Bear on a new product line to generate awareness for Smokey Bear’s fire-stopping efforts.

Some of these products include variations of the classic Filson Cruisers, the Smokey Bear Limited Edition Ranger Hat, t-shirts, towels, and an enamelware camp set. All of the products can be found on Filson’s site.

The Cooperative Forest Fire Campaign was established in 1942. As a partnership among the War Advertising Council, the federal Office of War Information and the U.S. Dept. of Agriculture Forest Service, it produced and distributed several posters between 1942 and 1944, intended to inform the public of the danger and preventability of forest fires. One of the drivers of the campaign was patriotism: during World War II, forests were part of the war effort, and destruction of trees curtailed wood supplies, obscured aerial flights of military aircraft, and pulled troops away from training to fight fires.

As part of the forest fire prevention campaign, characters from the Walt Disney movie Bambi were granted limited use in posters during this time. These proved to so popular with the public that the USFS decided it needed a new icon that appealed to children, free of copyright restrictions. 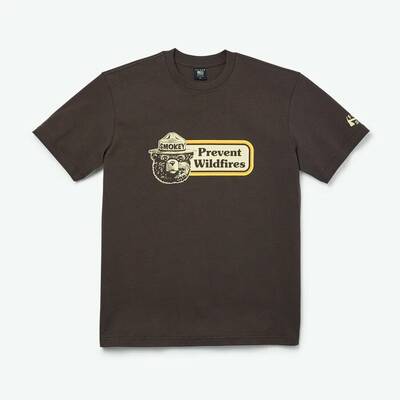 Only you can prevent wildfires! See this shirt.

Smokey’s message varied, but was always directed at the American public: that you, I, and everyone shared a responsibility to prevent wildfires. In 1947, the revised and lasting slogan “Remember—Only You Can Prevent Forest Fires” became the bear’s signature line. The ensuing Wildfire Prevention Campaign lasted 70 years, with hundreds of posters and other advertisements.

Six years after Smokey’s first appearance in print, the character found a new representative through a live American black bear cub that survived a fire in Lincoln National Forest’s Capitan Mountains of New Mexico. The bear cub was badly burned on its legs, but it survived after climbing a tree to escape the flames.

The fire crew rescued the injured bear, and a rancher among them took the animal home. Later, he turned “Smokey” over to a ranger with the New Mexico Department of Fish and Game and the bear was then flown to the National Zoo in Washington, D.C. The U.S. Forest Service adopted him as their living mascot of the same name.

Shop the Smokey the Bear Collection

These limited-edition items won’t be available for long. Celebrate Smokey the Bear’s legacy with this special line of apparel and gifts from Filson.

Backpackers.com Affiliate Policy: This article may contain affiliate links, which help fund our website. When you click on the links to purchase the gear we get a commission, and this goes a long way to creating guides, gear reviews, and other excellent content.

Arthur is Lead Editor of Backpackers.com. He loves to walk. It's as simple as that. He believes walking is the best way to experience the world. Thru-hiking the Pacific Crest Trail was his first backpacking foray, and he hasn't stopped since. Follow his adventures and stories on Instagram.