Backpackers.com — If you’ve been backpacking or camping, you’ve seen mosquitos. More often than not the flying monsters swarm your tent, body, and face at every possible opportunity, especially in the warmer times of year. With the prevalence of this most annoying (and possibly dangerous) creature in the wilderness and campsites, a lot of research has gone into mosquito prevention. It’s a science, an art, and an industry.

The guest post below is by Karen Thompson of InsectCop, a website about the prevention of mosquitos on every front.

Mosquito Protection for Backpackers and Campers

Mosquitoes are an age-old nuisance, especially for backpackers. Wilderness explorers have to deal with the buzzing that precedes a bite, and the scratching that comes from a successful puncture. For adventure travelers, there’s even more danger.  Many mosquito species carry mosquito-borne diseases today, like West Nile virus, Dengue, or even Zika, which can be dangerous when traveling in foreign lands. And for those that don’t know, West Nile is active inside the U.S. While it’s unlikely to get it from a mosquito in the backcountry, it’s not impossible. For those traveling abroad the chances of these diseases are much higher, which means that, in every scenario, being prepared for mosquitos is important. 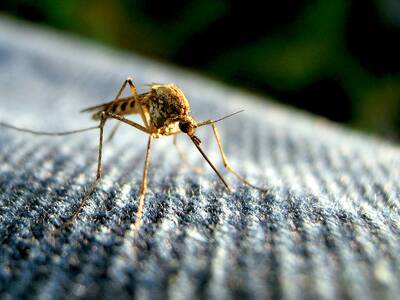 Here are the basic steps to preventing mosquito bites.

When it comes to mosquitoes, your first line of defense in wilderness (and anywhere, really) will be the clothing you wear. To understand this, it’s best to know the science behind mosquito tracking.

Mosquitoes find their targets in a few distinct ways. The main way they find human targets is the CO2 in our breath. Mosquitoes have a special organ in their proboscis called maxillary palp that allows them to detect CO2 from up to 150 feet away. That means we don’t even have to be in sight (or close to sight) for them to find us. They also use scent to detect lactic acid and moisture on our skin, both of which are common when hiking in the wilderness. Finally, mosquitos use sight to detect heat sources, and in the forest we’re pretty obvious.

You can’t do very much about your breath, but the other factors can be remedied by clothing. To shield yourself from mosquitoes as much as possible, you should wear long clothing, like shirts with full sleeves and pants. This will hide, block, and absorb all the moisture on your skin. Also wear light colored clothing because that typically reflects, rather than absorbs, heat. This will reduce the overall heat signature of your body, making mosquitos less likely to get close.

Fabric is another factor. Wearing clothing made from polyester or woven nylon is important because mosquitoes have a hard time pricking their proboscises through these fabrics. Most backpacking clothing these days is engineered with polyester, woven nylon, and other synthetics in combination with wool for just this reason. In addition, these fabrics will typically wick moisture away, decreasing overall heat. 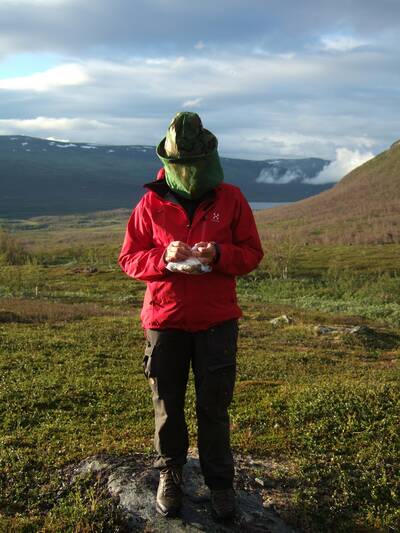 This clothing all works in conjunction to not only make the hike more comfortable, but to deter mosquitos. A wide-brim hat will help to cover parts of your face, but if it’s really terrible (or projected to be a terrible time for mosquitos) bring a head net. These are dorky, but can save you from a very swollen and unconformable backpacking experience. They also tend to weigh under 2 oz, so if you have the budget to grab one, you won’t feel the weight difference in your pack.

To further repel mosquitoes you can also spray your clothing with a mosquito repellent that contains a chemical called Permethrin. The best known mosquito repellant is DEET (which I’ll discuss below), but Permethrin is very efficient as well. It’s technically a pesticide, and is used for a number of treatments, not just keeping mosquitos in the backcountry at bay. The Permethrin chemical absorbs poorly in skin and is rapidly inactivated by our bodies, so it works best when sprayed on clothing. It also tends to have negative side effects if too much is used on skin, so don’t rub it in anywhere.

Giving your hiking clothes a fine dusting of Permethrin will not only repel mosquitos, but ticks and other insects. The chemical will negatively affect insects that touch it or eat it, which they’re likely to do if they land on you. This creates an effective barrier on your clothing, which is already a barrier.

The backpacking world has a number of easily obtained sources of Permethrin, the most popular being Sawyer’s trigger spray. These can be found on Amazon, REI, and other retailers, and are an effective clothing spray treatment. You could spray up just before you hit the trail, but I really don’t recommend that. 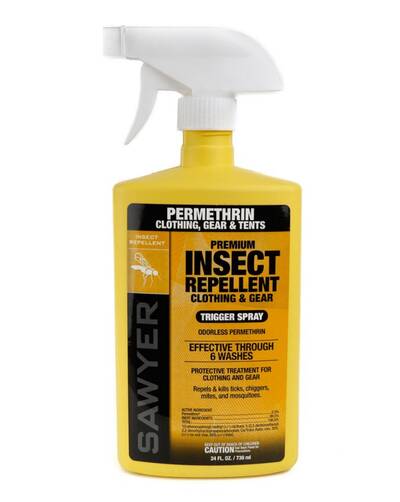 Sawyer and many users note that you’ll want to thoroughly spray your hiking clothes (and tent, backpack, or anything else, if you want) well before your trip. Allow for a minimum of two full hours to dry, and do this in a well ventilated area. The smell of the chemical is terrible, and you’ll want the clothing doused to make it work. This will allow the chemical to fully sink into the material, and make sure you don’t get any large amounts in your skin. After completely drying it should not smell.

Permethrin comes in varying concentrations — 0.5%, 10%, 13%, and 37.5%. The Sawyer spray has a .5% concentration. For the thrifty, you could purchase a much higher percentage for less money, then dilute that with water and put it in your own spray bottle. The 10% solution is easily attainable, but for higher percentages you will likely need to buy a farm pesiticide version. This is only recommended if you dilute the Permethrin greatly. This is pesticide, after all, and high amounts won’t be good for you.

For those who want convenience, just buy the Sawyer bottle. For those who want a DIY mosquito solution, shop around. Treatments should last 6 weeks or 6 washes at the least, but for higher concentrations it can be much longer. Doing this to your clothing and backpacking gear, or even a hat, is a great way to defend against mosquitos.

Then, of course, you can also use mosquito repellents with DEET. DEET is different than Permethrin mostly because you can apply it directly to your skin. You can use DEET in combination with Permethrin for mosquito-heavy areas, protecting your exposed skin and all of your clothing.

DEET has the longest history of preventing mosquito bites, and is therefore the most widely used and accessible product. Most backpackers and campers have a half-full spray bottle somewhere, and many take it with them on the trip. DEET has an immediacy that Permethrin does not — when the mosquitos come out at dawn and dusk, starting spraying. 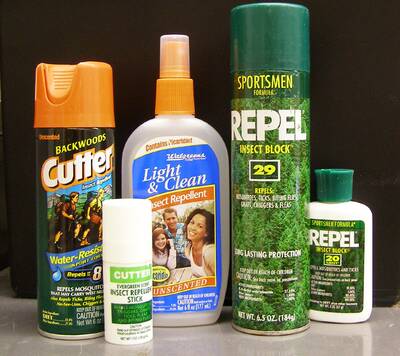 While Permethrin tends to kill insects, DEET simply repels them. Because of this the CDC states that DEET is best at actually preventing a mosquito bite (the bite itself), because it is the last bastion on your skin.

Much like Permethrin, DEET has different concentration levels. You can purchase repellant that is 100% DEET, which is pretty intense, but works. However, any DEET concentration over 50% does not actually increase the potency or power of the repellant, it just increases the length of protection. Due to that I recommend a DEET concentration of at least 30-50% for it to be the most efficient and not cause irritation. You can go higher if you want it to last longer.

Finding DEET should not be an issue. You’ll want to keep a small bottle handy for backpacking.

If you are completely against DEET, Permethrin, or any other chemical mosquito repellents, you can opt for a more natural repellent. Different plant-based oils like lavender, peppermint, tea tree or even citronella oils are known to repel mosquitoes to some extent. However, if you really want to trust a natural mosquito repellent you should use one that has the oil of lemon eucalyptus in it. Lemon eucalyptus oil works as well as lower concentrations of DEET and will need to be reapplied every couple hours.

It is understandable that some don’t want chemicals on or around their body, especially in the depths of nature. Get lemon eucalyptus oil if you feel this way, but know that Permethrin and DEET will work better, for longer, and have little-to-no side effects when used properly.

The final component of avoiding mosquitoes is taking into consideration the location of your camp site, or your trip in general. Think about where you set up camp, where you’ll be during dawn and dusk, and where you’ll sleep.

Mosquitoes love areas with lots of standing water. They breed in stagnant water and like to congregate in areas with many bushes and trees. Swampy and wooded areas are basically mosquito paradise, which is unfortunate for many, because often you’re camping in the forest.

Since you won’t be taking a mosquito trap on your next backpacking trip, choose an open, dry area to camp. Avoid small stagnant pools or ponds as well as generally damp areas with lots of greenery. If all the areas available to you include some sort of water and plant life (i.e. there are no large granite slabs), head to the spot that is farthest away from the most water, and try to camp above the water itself. See below for a mosquito heavy campsite. 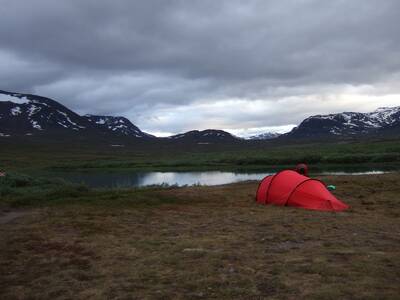 While these areas don’t provide a lot of protection against strong winds, rain, or other weather conditions, mosquitos can, in some cases, be much worse. If you haven’t prepared with repellant, it’s probably better to stake your tent heartily away from the mosquitos than cuddle up next to them.

To go along with this, time of year is equally important. Do research on the area in which you plan to camp. Call the ranger station, look up reviews, and see just how mosquito ridden your hike might be. This way you can plan ahead with Permethrin, or decide to just setup camp in a good spot.

2 responses to “Mosquito Protection for Backpackers and Campers”