Sockwell is a brand that lives up to its name: it makes socks, and the socks are designed to make you and your feet feel great. The company is founded on the principles of therapeutic socks, which use compression to relieve aches and pains, and sustainable, US-sourcing of goods to create uncompromising sleeves for your feet.

The Ascend II are graduated compression socks built for active use, and fall into Sockwell’s Sport Compression series. Sockwell makes the Ascend II in Crew,  Quarter, Micro, and Over-the-calf (OTC) versions, all of which use the unique mix of fabric and features to make for an impressive sock. 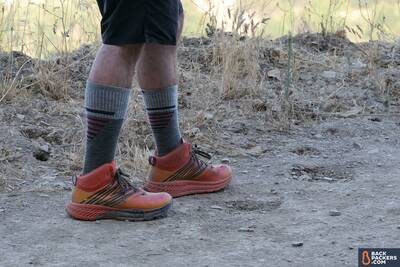 The Ascend II Crew socks on a morning hike.

Sockwell Ascend II socks have a number of enhanced zones for comfort, including breathable zones, compression, and extra cushion.

The Sockwell Ascend II socks are built to help you feel less sore after a long hike, and are available in multiple sizes for men and women.

The main feature of the Sockwell Ascend II line is the graduated compression. It’s a little known secret that compression socks significantly help your feet and legs recover from extended activity. Actually, it’s not a secret in plenty of sports, like basketball and soccer, but it’s not often talked about in the outdoor community.

The graduated compression in the Ascend II is noted by stripes across the foot and back of the sock. Getting them on requires some finesse, as the thread is quite tight due to the compression.

This is the main complaint of most backpackers at the end of a long trip: achy legs and feet.

You can hike all the time in graduated compression, but we prefer to alternate, and to use socks like the Ascend II on the hike out, and for days after to help your feet recover. 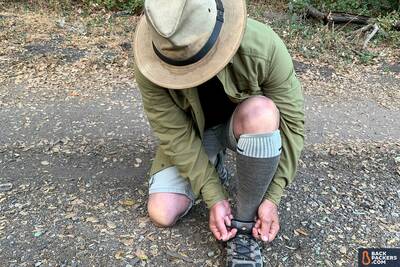 Lace up with the Ascend II before a long hike to save yourself from achy legs and feet.

Sustainable and Made in the USA

If sustainable clothing and a Made in the USA label mean something to you, Sockwell is a brand worth noting. Since its inception Sockwell has made its socks in the Southeastern US, and will continue to do, ensuring fair labor practices and high quality product. 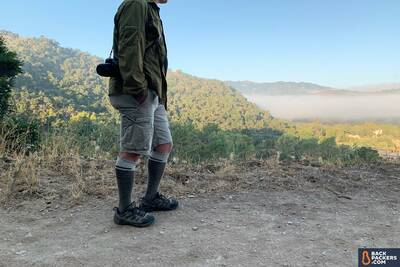 The sustainability push is specifically focused on Sockwell’s support of American farmers who raise free-grazing Rambouillet merino sheep (Google the sheep, it’s worth it). This merino wool makes up a large percentage of all Sockwell socks — the Ascend II uses 46% wool. Sockwell also uses Alpaca in their socks, adding a coziness that’s often missing from outdoor focused socks.

Sockwell is a Chattanooga, Tennessee based sock company that makes all of its socks in the US, and sources sustainable wool from the US as well. They make therapeutic socks, and for the outdoor market their graduated compression helps legs and feet heal after long treks.

See the Ascend II, and learn more about Sockwell.

This article is sponsored by Sockwell