Backpackers.com — Pouring yourself a steaming cup of coffee in the early dawn while overlooking a placid lake, a sliver of moon still sharp in the sky, is one of the reasons people go backpacking. Your cup of joe from Starbucks may be delicious, but those that have lived the pleasures of that early-morning sip know there’s nothing quite like it.

Getting the coffee into the backcountry is another story — one that involves extra weight, confusion about the where to dispose of wet grounds, enough coffee for your entire group, and, most importantly, an over-brewed cup of coffee.

Is backcountry coffee a luxury? Yes. But you’d be surprised how many backpackers, even the ultralight crowd, refuse to go on a trip without the substance.

There are a host of tools to make the backcountry coffee experience easier, like instant coffee and fancy presses. While all of them work, most have flaws. As gear fanatics backpackers appreciate innovations that have the least amount of flaws, the lightest weight, and the most variable functionality.

The Pascal Press, available on Kickstarter today, sets out make the backcountry coffee experience better than ever. It also works equally well for your daily grind, car camping, or a day hike — basically any scenario where you want to brew your own cup of coffee. 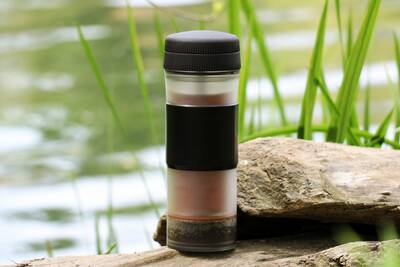 We interviewed the founder and inventor of the Pascal Press, Alan Kalbfleisch, which you can read below.

The story of the Pascal Press begins at a university. The inventor, Alan, is a Mechanical Engineer at Western University, and the Pascal Press became his primary focus while completing his degree in Experimental Thermofluids Engineering.

Initially the concept and design was posted to Reddit, and with support from the rabid backpacking crowd on that network, his school, and a program called Propel, the Pascal Press is about to see the world.

The Kickstarter itself is indicative of a well-thought-out plan that is realistic about production costs. Based in Canada, the Press will need $40,000 CAD (about $31,000 USD) in order to succeed, and the product won’t be shipped to your door until March of 2017.

Some Kickstarters are quick and dirty — the Pascal Press is not. Alan, like any good inventor/entrepreneur in today’s world, fully intends this to be a consumer product with a long shelf life. 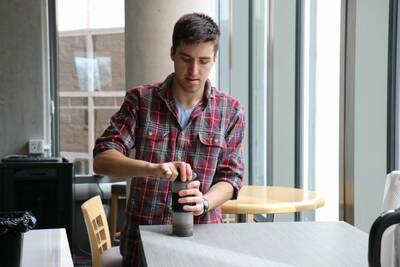 The Pascal Press, if it succeeds, will have a retail price of $39 USD. On this Kickstarter you can grab a Press (or four) for much less. The Press is only $28 USD for the Super Early Bird Special, and $31 for the Early Bird Special. The quantities at these prices are limited, so if you want a cheaper Press, buy it on the sooner side.

You can see how the press works and the process in the Kickstarter video, below:

Before we get into the interview, here are the main components of the Pascal Press:

Backpackers: Can you talk some about the invention process for the Pascal Press?

Alan: Pascal Press started as an engineer challenge I gave to myself while working on my Master’s. I was always on the go and got frustrated by the quality of coffee from things like the GSI Commuter Press or Bodum Travel Press. I used the Aeropress at home but found that clumsy to use on the go.

I wanted the quality of the Aeropress in the convenience of a travel press.

To be honest, I did not spend much time thinking of the center flow tube. I needed a way to bring the coffee from the bottom of the outer cup into the plunger. It was either going up through the sides, which would ruin the insulation and be a pain to clean, or go up the center. Other designs like the interchangeable filter and leak proof lid came through prototyping. There wasn’t much of a plan at the start. I wanted a good travel brewer so I built one, tested it, and figured out ways to make it better.

Backpackers: Could you give a brief explanation of what the Propel program is?

Alan: Propel is an on-campus business accelerator at Western University. It is open for any students at Western to get advice on their ideas. Some other successful Kickstarter campaigns have started out of Propel, like Rockwell Razors and Litewire.

Through Propel I was able to get some initial seed funding to cover the cost of prototypes and my patent. They have been a great resource to accelerate Pascal Press through the prototyping stage. They have also connected me with people that have really helped to make Pascal Press into a potential business rather than just another one of my engineering projects.

Backpackers: How long does “pressing it down” and filtering the coffee take?

Alan: I usually let my coffee steep for 45 seconds to one minute, then press for 15 seconds. I don’t want to give specific guidelines for users though. Like other coffee brewing devices, I want Pascal Press to be a tool that coffee lovers can experiment with and make their brew, their way.

Backpackers: If the Kickstarter goes well do you have plans for larger models?

Alan: Larger models would be difficult. As the surface area of the plunger increases, the user will need to use more force to generate the same pressure in the outer cup. To make one with more volume, it would need to be taller, rather than wider. For now, the 14 fluid ounce version is all I have planned.

Backpackers: What is the competition you’re facing, other brands in the field, and how is your product different?

Alan: My biggest competition is products like the above-mentioned GSI Commuter Press and Bodum Travel Press. Those products have focused so much on portability that they have almost ignored coffee quality. If the grounds and coffee are only separated by a filter, the coffee will continue to brew and develop overly bitter flavors.

Pascal Press completely isolates the grounds so there is no chance of over-brewing. Pascal Press is also incredibly easy to clean. Unlike other travel presses, the grounds in Pascal Press don’t sit in liquid after brewing. A pocket of air is pushed through at the end of the press that clears the bottom chamber of any remaining liquid.

The dried puck of grounds can be lifted out of the outer cup, using the flow tube as a handle. Just give the filter a tap over a garbage can and the grounds come off without the need for excessive rinsing.

Alan: It seems like a lot but that is the cost of making a new product. Tooling and production setup is expensive, especially for a product that requires accurate tolerances like Pascal Press. The money will go straight to our manufacturing partner to start making the tooling for all of the parts.

Backpackers: Have you invented anything else?

Alan: I am always inventing and prototyping. Pascal Press will keep me busy for the foreseeable future so I don’t think I will be releasing anymore inventions anytime soon.

Backpackers: Will the press work for tea as well?

Alan: It does work for tea. One of the Kickstarter stretch goals will be a more coarse filter to reduce the pressure generated by the plunger. Some teas are too delicate for the pressure brewing process. With a coarse filter, you will be able to brew tea without worrying about damage to the leaves.

Alan: I usually brew with a dark roast blend from Fire Roasted Coffee Co. in London, Ontario. I use a medium fine grind, and let it steep for about a minute with a 15 second press. That works for me but I am sure other people will come up with their own methods.

We also have a video of a taste testing session at Fire Roasted Coffee Co.:

Innovation and gear are two of our favorite things — we hope the Pascal Press flies off the digital shelves, and finds its way into your life. A backcountry coffee press has never been this all-encompassing and easy-to-use, which is saying a lot.