Backpackers.com — Headlamps are a key piece of backpacking gear due to their tiny size, lack of weight, and usefulness after the sun has gone down. You won’t find someone in the wilderness without one. For the most part the market is saturated with excellent models, but few really stand out from the crowd. Multiple light modes, concentrated beams, and varying lumen counts are what you’re looking at normally.

Enter innovation, Kickstarter, and a peripherally illuminating headlamp and beltlamp by ONE8Ø Light. The company has engineered two products — the Halo Headlamp and Trek Beltlamp — and is ready to offer this full LED band headlamp technology in this crowded market. Having launched the Kickstarter on April 12, 2016, the product was fully funded within a day. That’s either very good marketing or a sleeper batch of donors ready to boost this thing, but it doesn’t matter in the end.

The product will be shipped, and you can still purchase a unique full LED band headlamp for half the MSRP during the Kickstarter run. We got in touch with Ammon and Rusty, the creators of ONE8Ø Light, to get the full details. Check out the details of the product and their answers below.

We’ll start with the Kickstarter video, which shows off the ONE8Ø Halo and Trek. To be clear, the beltlamp and headlamp are exactly the same except for the size of the band.

As you can see the main innovation of the ONE8Ø Light is its 20-LED band strip, which covers the entirety of your forehead or stomach and provides wide, even light. This is in sharp contrast to the typical backpacking headlamp, which is centered above the eyes and provides either a direct cone of light or a wider, less intense wash of light.

The ONE8Ø Light hopes to upset the market — disrupt, if you will, though this isn’t exactly the tech world — by creating a light that allows much more visibility. When it comes down to it, that is the point of a headlamp, so this seems like a good place to start when designing a new product. 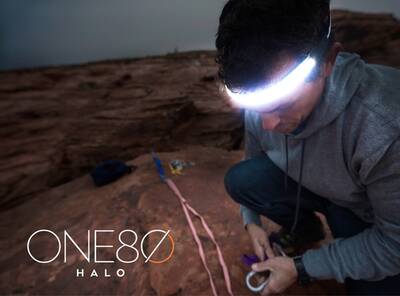 The other main difference between this and other headlamps is the lumen count. Often headlamps have anywhere between 50-300 lumens, which corresponds to their brightness. The ONE8Ø light has 360 lumens, which packs a serious light punch. While LEDs are standard fare among headlamps today, no other major backpacking headlamp on the market has 20 of them — usually three, maybe six at most.

A few more great features are packed into the ONE8Ø Light, which some headlamps have, but you usually pay a premium for. One is the micro-USB rechargeable lithium battery. Ammon and Rusty said in regards to the battery,

“Using a standard 1 amp USB charger the charge time is about 2 hours. Battery has a 3 hour run time. Extra batteries are available, and at only 1.5 oz [it’s] easy to carry extras and swap out as needed.”

This brings up the weight of the ONE8Ø Light, which is 3.3 oz in total, about half of which is the battery. That’s as light as other backpacking headlamps on the market. 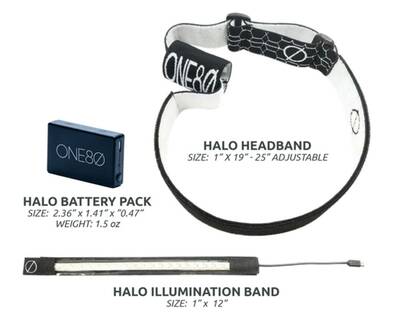 Then there’s the waterproof LED band:

“LED illumination band is waterproof. Battery pack is water resistant. In testing this, I submerged the entire headlamp in a bucket of water with the light on. It stayed on for about five minutes. I took it out and put the battery aside to dry. The battery continued to work for about an hour after, then died. The light was perfectly fine. The battery handled better than expected for being water resistant, but is not waterproof.”

So, don’t dunk this thing if you want it to keep working. But if you’re stuck in a dark storm you’ll be able to use the ONE8Ø Light without worry. For about 3 hours. The one downside to those 20 LEDs and 360 lumens of light is the battery time, which is minimal compared to other headlamps. Part of this is because the output is just so high, but another part is that the ONE8Ø Light does not have any dimming capability. At least, not in this first run. Ammon and Rusty said,

“The current model only has one brightness level. We are currently working with our manufacturers to add additional functions [like] modes, colors, level of brightness, and additional accessories on our future models. Right now we are committed to getting the ONE8Ø Light to our backers on or before our commitment date, and so will not be making any major changes for this first version.”

Sticking to shipping dates is incredibly important when it comes to new products and acceptance in the market, so this is the right approach. But 3 hours is not the best battery life for backcountry use. If you have a backpacking solar charger it takes care of the issue, or you could buy multiple batteries, as mentioned above. Still, not ideal.

We asked about the list price of the ONE8Ø Light, which is $75 for the Halo. The Kickstarter cuts that in half (or more, depending on what tier you buy at), but if this product were to enter retail stores and have a post-Kickstarter life, that is a very high cost. Ammon and Rusty said,

“We feel that the ONE8Ø Light is more versatile than most other headlamps, has 20 LEDs, has a rechargeable lithium battery, and provides the user with a much better night time experience. We feel that those things add value to the ONE8Ø Light. The initial MSRP is based on lower quantity purchasing. Larger orders, as we anticipate making, will lower these costs and we will certainly reevaluate the future MSRP accordingly.”

They also noted that there’s a one year warranty on the light, so if your bulb strip goes out within a year, you can get a replacement. Our last question for them was based on a scene in the Kickstarter video in which multiple campers are sitting around enjoying the night with a bunch of ONE8Ø Light headlamps (pictured above). This seems unrealistic given how bright they are. Ammon and Rusty said,

“It is a very bright light and not comfortable to look at someone with it on. However, in many ways its not as bad as looking at the direct concentrated beam of a normal headlamp. Because the light is dispersed wider it doesn’t seem to be quite as offensive. As far as the group in the video; we’ve found (completely by accident) that if each person is wearing one [of] the ONE8Ø Lights … other people’s light doesn’t impact you as much for whatever reason. That’s why they seem so unaffected by the other’s lights in the video.”

As with many product innovations, this is a clear case of trial, error, and experimentation. But that’s what needs to be done in order to create something unique. It seems like the ONE8Ø Light is indeed unique, and will provide backpackers and runners more light than what’s currently available.

At the time of writing you can still grab a ONE8Ø headlamp for $37, and a beltlamp for $42. The only difference between these is the size of the strap — the LED strip and battery pack are the exact same. That’s roughly the cost of a medium range Black Diamond or Petlz headlamp will cost, so the price is right.

All images courtesy ONE8Ø Light, All Rights Reserved