NEMO, an outdoor company founded by an engineer, is known for innovative design. And with the NEMO Disco 15, they took a tried-and-true concept — like the mummy sleeping bag — and turned it on its head.

The end result is a spoon-shaped sleeping bag that has way more room for side sleeping, tummy sleeping, and restless all-over-the-place sleeping. 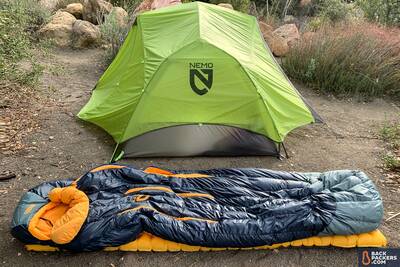 The NEMO Disco 15 in camp, pictured with the NEMO Dagger 2P tent.

If you’ve ever woken up in the night and wondered why your sleeping bag was turned upside down, why your feet could barely move, and why it was so hard to get out of the bag to relieve yourself — the NEMO Disco 15 is for you.

The Disco 15 is one bag in a line of spoon-bags, and has the best price point and features for most backpackers. It weighs well under three pounds and comes in a 30-degree version as well.

NEMO sleeping bags don’t aren’t just innovative in their shape. There are a handful of features in the Disco 15 to make it stand out from the very crowded lightweight sleeping bag space.

First, there’s the pillow pocket. This allows you to stuff pretty much any-sized pillow right into the hood, so when you’re sleeping it doesn’t roll around. They do this with a simple open flap — ingenious. We prefer to stuff it with a puffy and get the ultimate in cozy warm sleep.

The pillow pocket is a simple flap in the hood that encourages you to insert an inflatable pillow, or a puffy, as shown above. No more night-time pillow sliding.

Second, there’s the Blanket Fold, which is a small, comforter-like piece of fabric that you can use to snuggle up. It can sit outside your bag if you’re too warm, or you can pull it down around your hands for some heat. 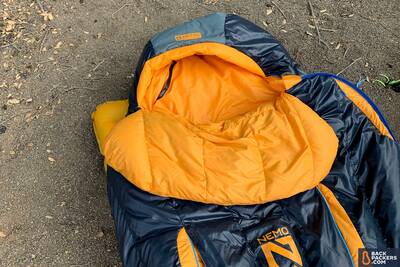 The NEMO Disco 15 blanket fold, on the outside of the bag. Stuffed with down, it’s another layer of warmth for chilly nights.

Finally, the bag is built to withstand water. The 650-fill RDS-certified down is treated with a PFC-free hydrophobic coating. This means each individual down feather is coated to resist water, and dry out faster if it does get wet. This combines with a waterproof footbox on the sleeping bag for maximum foul weather protection.

The “15” in Disco 15 stands for the Tested Lower Limit temperature of the bag. It means you’ll be warm enough (in a survival sense) down to 15 degrees, and plenty comfortable at 25 degrees. This makes the Disco 15 an excellent three-season bag for most people, given temperatures will likely not drop a ton below that.

However, for those who like adjustability, the Disco 15 has two long Thermo Gills. These are zippers along the top of the bag that seal in warmth when zipped up, and let heat out when zipped down. 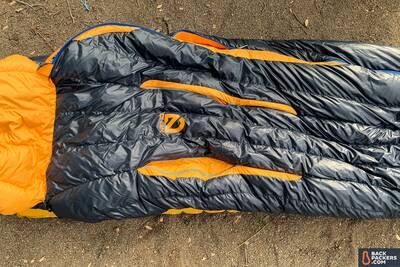 The Thermo Gills are pictured here, in the center of the bag. They are open. Discreet zippers are used to shut them, and regulate temperature as you need to throughout the night.

If you, like a lot of backpackers, wake up stuffy with heat in the night, just unzip the Gills instead of kicking your feet out of the bag. The feature works surprisingly well, and keeps you sleeping through the night (which is the whole point of NEMO sleeping bags).

NEMO technically stands for New England Mountain Outfitters, and is one of the premier backpacking hard-goods brands in the outdoor industry. Known for ultralight tents, sleeping pads, and sleeping bags, the company focuses on unique design to solve problems of comfort, warmth, and durability.

This article is sponsored by NEMO.