HomeBlogNpmaps All National Park Maps In One Place

Backpackers.com — Backpackers like to think of themselves as explorers, as pioneers of the great wild expanses. Individuals like Lewis and Clark, John Muir, and Bob Marshall helped to develop this grand persona, and they did so by developing one key resource that we all use today: maps.

As time has marched on the number of maps that trace the U.S. wilderness has reached epic proportions. There are countless companies that make maps, each with a unique approach and set of important factors. It’s an art and a science. While many dedicated backpackers today create their own on-the-fly maps with programs like CalTopo, most of the map data in the U.S. comes from one main source: the National Park Service.

But these maps are not easy to find with a click. NPMaps is a website that has painstakingly collected all the national park maps (well, most of them), put them in one place, and made them incredibly easy for you to access. We interview the creator below.

NPMaps — National Park Maps in One Easy to Reach Place

The National Park maps are used by millions of travelers every year, but they’re not easy to access in a bulk sense. The maps are spread out over hundreds National Park Service pages. Finding a map quickly can be difficult, and getting a grasp on what maps are actually available is often frustrating.

Matt Holly, a park ranger with the NPS, recognized this problem and decided to solve it. He created a site that contains nearly every National Park Service map out there, organized them onto his own site, and made them easy to find. It’s called NPMaps, and if you’re planning a trip in any National Park, it should be bookmarked as a resource. 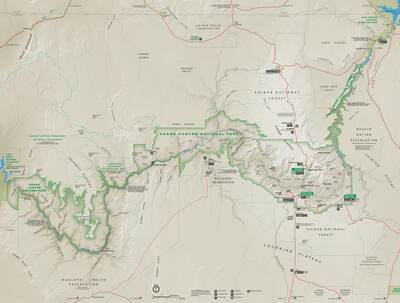 Holly has either downloaded or digitized over 1600 National Park maps (and counting), each of which is available for free in the catacombs of the NPS website, and uploaded JPEG and PDF versions for users. This has been a labor of love (and serious time), all with the hopes of providing a simple and easy-to-use resource. The uploaded maps include National Parks, National Monuments, National Seashores and Lakeshores, and other National Park areas. You can find maps by individual Park or by state.

The goal of NPMaps is to have all the National Park maps in one place.

It’s important to note that this does not serve as a replacement for NPS websites. It does not include park closures, park updates, and any immediate park changes. It is simply a catalogue of maps, and should be used as such.

We got in touch with Matt via email to discuss the origins of his site and where it’s going. See the interview below.

Interview with Matt Holly of NPMaps

Backpackers: What is your background with the National Park Service?

Matt: I’ve been a park ranger since 2005. I’ve worked for a few different parks and offices, including Yosemite, Sequoia, Acadia, Voyageurs, and the Climate Change Response Program.

Backpackers: What was the origin for NPMaps?

Matt: I initially set up and created NPMaps during the federal government shutdown of October 2013. I had always wished that NPS.gov websites were a bit more logically organized and that maps wouldn’t be scattered across numerous different pages; often it’s trail maps here, park maps there, campground maps over there.

During the shutdown, I couldn’t work, couldn’t recreate in the park, and couldn’t travel, so I looked for a project to keep me busy. I saw a thread on Reddit that was a guide to create a mobile app and I thought, “Hey, I wonder if I could create an app that would just download park maps and nothing else?” But it didn’t take me long to realize app development was a whole world I knew nothing about. But a website? Although I had never created one before, I thought that was something I could pull off.

Backpackers: The website is much more than a directory of maps. You provide context for areas in most places, which is a lot of effort. How long did it take you to build this?

Matt: I’ve worked on NPMaps in fits and starts, as the graph on my recent blog post shows. During the shutdown and right after, I had a lot of energy and popped out the pages left and right during winter evenings after work. Life soon got busy and I got a bit overwhelmed — I had so much work to do and didn’t know if anyone would ever even find my page — was it even worth the effort? So I mostly set it aside for the next two years.

Then this winter, I noticed traffic to my site was starting to finally happen. A couple people who stumbled across my site sent me emails that said, in essence: “This site is so great and such a lifesaver; you have no idea how much it’s helped me plan my vacation!” Those messages gave me the drive to get back to work, knowing that I actually was helping people out.

Backpackers: At the moment you state you have 803 (over 900 now) maps. Do you have an estimate of how many there are, or how many you’re shooting for? And do you include only maps found on National Park sites and brochures, or other maps too?

Matt: I do have 804 maps as of today (he has added over 100 since our interview), and I update that number every time I add new maps. I have no magic number I’m shooting for and no idea how high I end up. I really don’t expect my work to ever end — there are over 400 national park units that are constantly updating their maps and I only have 83 parks done so far. On top of that, there’s Forest Service, Fish and Wildlife Service, BLM land … I could be spending years on this.

My goal is for each page to at least have the official park map, and then whatever else I can find on NPS or other government websites. Right now I’m sticking with maps on .gov sites, since they’re all public domain and free to reuse and modify.

Coming soon: more USGS topo maps. And eventually I may include other non public domain maps too, but those will require extra work and seeking permission, and I’ve got plenty of work cut out for me already. So that will come later.

Backpackers: How much of this website is automated vs. done by hand? For instance, in each National Park section you list how many maps you have up top. Will you have to change this number manually every time you upload a new map?

Matt: There’s no automation on my site; everything is done by hand. Now I’m not saying this because I necessarily think it’s some kind of virtue — I just don’t know how to automate anything! And that’s fine — it gives me more control and ability to keep things consistent from page to page, which will make things easier for the user.

Matt: I have been keeping track of my “most popular” pages, but keep in mind that “popular” is all relative — my site is still pretty undiscovered and hard to find through search engines unless you use just the right keywords. For March 2016, Joshua Tree maps had the most unique views, followed by Big Bend maps and Bryce Canyon maps. 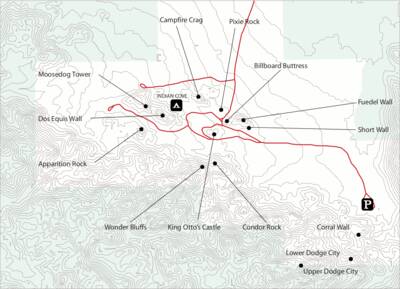 Least popular? Guadalupe Mountains maps. I have no argument with that — content on that page is so far very minimal with only two maps. I’d avoid it too.

Backpackers: Do you have plans to add any integrated topo maps to the website?

Matt: I like the thought of having integrated interactive maps available on my site, but right now that’s just one of those “Hmmm, it’d be neat if eventually I could…” sort of ideas. Right now my focus is on easy-to-download and easy-to-print maps that can be used offline, so I’d like to keep hammering away on that focus for now.

Note: As of April 16, 2016, Matt has added basic interactive Google maps to each National Park site with a point of interest.

Backpackers: Why do you include the National Geographic trail maps as a paid option on the website? Do you like those maps specifically?

Matt: I know a lot of people who stumble across my site are looking for maps that may not exist in free form, such as nice detailed trail maps that cover the entire park and are suitable for navigation. For these maps, there’s usually really no other option but to pay for them. Personally I own over a dozen of the National Geographic Trails Illustrated maps, and I’ve found that probably 90% of the time these maps are the best choices for backpacking and more serious hiking. So it made sense to me to include options on each page to find these maps.

That said, it’s not entirely altruistic either. When I put my first webhosting bill on my credit card, I realized this project could quickly become both a time sink and a money sink. I am fine with it taking up my time, but I’d rather not have it take all my money too! So rather than plastering pop-ups and obnoxious ads all over, I decided that Amazon affiliate links would be less obtrusive and less frustrating for the user. That way I could just keep regular display ads to the sidebar where they wouldn’t get in the way of anyone’s browsing.

Backpackers: What’s your favorite park, and what’s your most valuable map?

Matt: There are so many variables that go into choosing a favorite national park! Time of year, how much time I have to visit, what recreational activity I am doing … But overall, I want to give my favorite park award to one that deserves much more recognition than it usually gets: Canyonlands. The Needles and Maze districts are some of my favorite places on Earth, and that’s probably because they feel like different planets altogether. Yes, my favorite place on Earth is the least Earth-like! 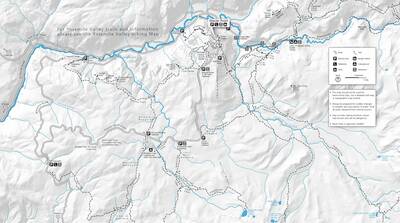 My favorite map is the National Park Service’s Yosemite Glacier Point Road trail map (above). Odd choice, right? Well — I created it. I’ll be the first to admit this isn’t the greatest map in the world, as there were a number of design constraints that limited what I could do with it. But it’s the first map I ever created and was a massive improvement over the previous map that was being handed out at the visitor center. And it’s still being passed out today! It’s incredibly rewarding knowing that park visitors in Yosemite are using a map that I designed.

Next time you head into National Park Service land, consult NPMaps. Download whatever map you’ll need, and bask in the ease of what Matt Holly has created.