Backpackers.com — Frazil ice has nothing to do with the muppets. If you came here for muppets, sorry. No, the frazil ice phenomenon details the process in which an active waterfall’s mist is subject to freezing temperatures. These particles of frozen mist fall into the stream or river below the waterfall, cooling it. Then, usually overnight when it’s sub-freezing, the stream itself begins to freeze in sections.

The result is a moving stream of slush that looks like the frozen version of molten lava running through the forest. 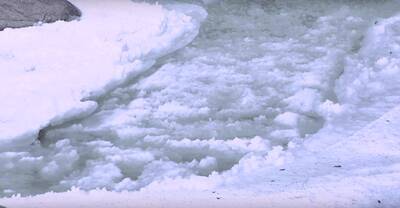 We decided to write an article on this because, first of all, it’s awesome. Frozen Slurpees sliding through the forest would be amazing to witness, and there’s a good chance of that happening if you head to Yosemite National Park in March or April. On March 23, the Yosemite National Park tweeted that the phenomenon was currently under way:

Frazil ice was spotted on #Yosemite Creek this morning! Learn more about the natural phenomenon in this Nature Note: https://t.co/KCqDkwBVM3

The Frazil ice phenomenon is often accompanied by another wondrous frozen sight, the snow cone. As the video shows above, falling water from the falls freezes before or when it hits the ground, and instead of running into the stream it begins to pile up. Over time the frozen water piles into a large cone of ice that reaches up to the fall from whence it came.

This is common for waterfalls in frozen areas, but happens on a majestic level at Yosemite’s Upper Falls. 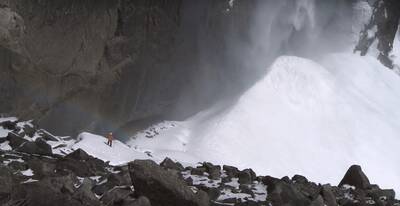 It’s commonly believed that the snow cone is the cause of the Frazil ice, but the rangers in the video above debunk that myth — which means these two awesome winter/spring events occur simultaneously.

And, for those frolicking near these falls during Frazil ice times, be aware of its danger. It looks a lot like snow, but it’s not snow. It’s very loose, chunky slush that will most likely have a foot of fast-flowing, freezing water beneath it. At times it can be much more, and as the video shows, the river combined with the Frazil ice can and will flood areas.

Frazil ice is a scientific term that literally refers to the length of and type of ice crystals — they are small, needle-like crystals “typically 3 to 4 millimeters (0.12 to 0.16 inches) in diameter.” While Frazil ice can occur at the base of waterfalls, it’s also the freezing process that creates sea ice.

The National Snow & Ice Date Center says of this process, “Because salt doesn’t freeze, the crystals expel salt into the water, and Frazil crystals consist of nearly pure fresh water.” 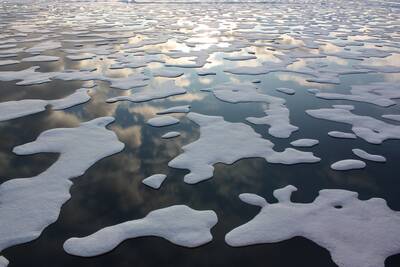 The almost pure fresh water freezing process results in large ice sheets that float on top of the ocean. This is one of the ways large sheets of ice form in the Arctic and Antarctic.

Sea ice aside, spring is here, and your chance to view the Frazil ice phenomenon is possible.