Camp lanterns have come a long way even in the last 10 years, never mind the evolution from the now “vintage” liquid fuel and propane stoves your family may have grown up with (cue the Fleet Foxes vinyl at the glamp campground, and I’ll bring the rosé). Goal Zero is a leader in the portable power and lighting categories and the Lighthouse Mini lantern continues the evolution of the camp lantern with simple controls and tons of functional features in a small package.

With two lighting modes, multiple mount/stand options, and the flexibility to recharge and charge your small electronics on the go, the Goal Zero Lighthouse Mini is a powerhouse camp lantern perfect for road trips, socially distant backyard BBQ’s, and emergency preparedness.

When darkness comes around and your night’s just getting started, reach for the Goal Zero Lighthouse Mini lantern. It’s bright, can stand, hang, or stick, and is small enough to pack. In other words: “May it be a light for you in dark places, when all other lights go out.” – Galadriel, The Lord of the Rings: The Two Towers

While we think the Goal Zero Lighthouse Mini lantern is a versatile lantern, it straddles the backpacking and camping line a little too closely for our Pick awards. Most discerning backpackers would rather take a headlamp, and most serious car campers would pack a larger lantern for late-night games and food prep. If you fall in the middle this may be the ideal lantern for you.

Check out the full Goal Zero Lighthouse Mini review below.

I’m living that #vanlife these days, and lighting makes all of the difference between feeling like you’re sleeping in a van and feeling like you’re at home. I have overhead lights that run off of a Goal Zero Yeti Lithium 1000, which also powers everything in my life on the road. But sometimes when the power is low, or you just need a little light to read by, or when nature calls at 2 a.m., a lantern can be a handy tool. 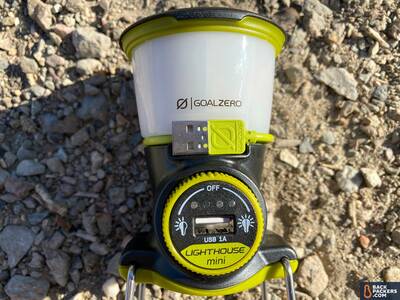 A closeup of the Goal Zero Lighthouse Mini.

I’ve been using the Goal Zero Lighthouse Mini lantern for about 18 months and it has been a trusty companion for nighttime cooking, reading, and digging around under my bed for outdoor gear (10-30 percent of my waking hours).

I haven’t used the Lighthouse Mini for backpacking, but at eight ounces it’s technically light enough that it could be used for extended backcountry basecamps with multiple people. I personally wouldn’t take it solo backpacking for weight reasons, but I would understand the desire to bring such a handy light for afterhours tent shenanigans, whatever those may be. 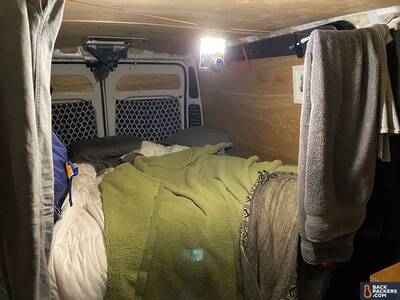 The lighthouse Mini is an excellent bright spot in if you’re a #vanlife convert. It hangs, sticks to outside of the vehicle, and dims down for reading.

The Goal Zero Lighthouse Mini clocks 210 lumens on its brightest setting: more than enough to light up a small room or area for moderate activity like simple cooking and chilling with friends.

Plus, the Lighthouse Mini is technically two LEDs, which are split down the middle. This means you can power up a single side for less light overall and directional light, or use both sides for the full lantern effect.

People are always going to want more lumens, but the Lighthouse Mini provides solid lighting for most casual nights in camp or the yard.

On low-to-medium settings the Lighthouse Mini lasts for hours and days of use. It is usually weeks between charging even when I use it almost every night. On the highest setting with both LEDs on, the battery drains in 3-4 hours. It’s rare that I need 210 lumens for 3-4 hours in camp, so I was impressed with this battery life, especially for how compact the overall light is.

Charging the Lighthouse Mini from 0% on a standard wall outlet or vehicle USB plug takes about four hours. 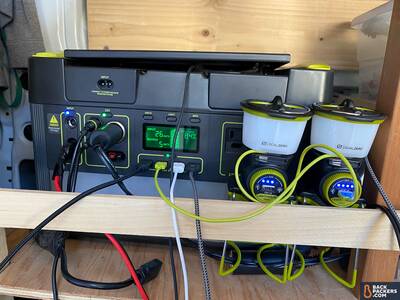 Charging up one Goal Zero Lighthouse Mni lantern from the Yeti Lithium 1000 battery, then charging the other Mini Lantern from the output port of the first one.

I also love the USB output port which allows me to charge my cell phone or watch when I’m trying to conserve energy for my van battery. Goal Zero quotes the following charges from the lantern to your small devices:

In general use I find the above to be true, though I haven’t sat around and tested each one individually.

The Lighthouse Mini lantern has one dial. That’s it. The dial turns the lantern on, it switches it to single or double LED mode, and acts as a dimmer switch in both modes. The USB out port is always on so just plug in a cable and start charging your phone or headlamp. Simple! 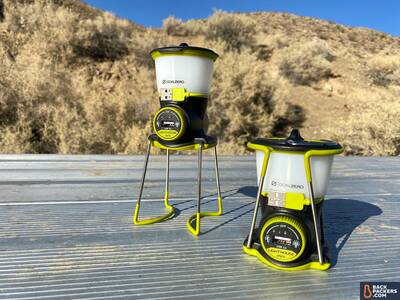 One large knob on the Lighthouse Mini allows you to dial in the amount of light you want.

Knocking off half a star here because at random times the lantern would not turn off until I turned the knob to “off”, then “on”, then “off” again. Not a huge annoyance, but I wonder if it will worsen over time. Both units I tested had the same issue.

The Lighthouse Mini has well-designed mounts for getting light where you need it. A small magnet under the base allows for mounting to metal surfaces which is great for van living. An open hook on top makes hanging from tent ceilings or tree branches a cinch, and two fold-up legs elevate the lantern on surfaces so you can eat, read, or play cards for hours. There’s also a standard threaded tripod receiver if you need light in a specific place and height. 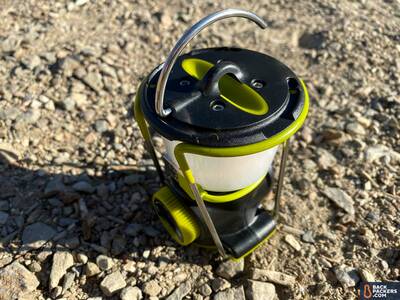 You can hang the Lighthouse Mini with this simple hook, which flattens into the top of light when not in use.

In my experience, getting used to the spread of a lantern’s light takes some finangling. You have to move it here, there, and almost everywhere to get the right light for your setup. The multiple mount options make finding the best light straightforward and easy.

Knocking off half a star here because while I found the magnet mount to be useful in the van, I wish it were stronger. Driving down bumpy dirt roads the lantern frequently falls off of my interior ceiling. 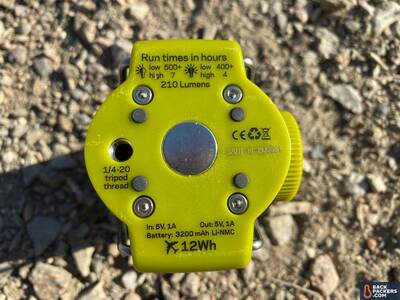 The bottom of the Lighthouse Mini has a magnet that lets the lantern stick to metal, and a threaded hole for securing on a tripod.

I have dropped the Lighthouse Mini too many times to count and it looks and functions fine. A few scratches and nicks, but the plastic body and metal hardware feel like they will last. No complaints here.

The lantern sometimes gets stuck in the “on” mode even if the knob is set to “off.” This is usually fixed easily by turning the dial to an “on” position and then “off” again. I’m more concerned about the long-term durability of the on/off dial than the seldom inconvenience at this time.

Secondly, the magnet on the bottom of the lantern could be stronger. It tends to fly off the ceiling or wall of the van on major bumps. This probably isn’t a concern for car camping and backyard hangouts, but it annoyed me.​​​​

Surprise third gripe you never saw coming: when charging the lantern, an unnecessarily bright, blue indicator light flashes until the battery is fully charged. I appreciate the info, but my van is already illuminated by enough displays and lights to rival a small NASA outpost and I don’t need another one. Also, isn’t blue light bad for your eyes? I read the title of an article that said that once…

We tested the current version of the Goal Zero Lighthouse Mini, which has a non-removable Lithium Ion battery. Goal Zero also makes the full-sized Lighthouse, which is more expensive, larger, and more feature-packed. 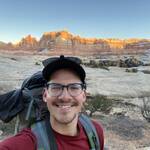 Backpackers.com Review Policy: We do not accept payments or gifts from brands and vendors, and strive to provide unbiased, independent advice. Brands typically provide review samples which we return, and in some cases we purchase the item so we can keep using it long after the review.