The La Sportiva Wildcat is designed for jogging over dirt and rocks, but they’ve also been proven to excel as a long-distance backpacking shoe. They are rugged, durable, medium-weight, and fairly aggressive on tough tread.

Backpacking gear has dropped some serious weight over the past several decades. You’re likely carrying a fraction of the poundage that your adventurous grandad did in his day (and that was back when trails went uphill both ways, mind you), so it makes sense that your feet don’t require as much support as his did. That’s why modern backpackers are transitioning away from heavy boots to lightweight trail runners.

The La Sportiva Wildcat is sturdy and moderately cushioned, has a large heel-toe drop, and burly traction, a unique combination that works amazingly for some, not so much for others. There is decent comfort and solid support for hikers who are carrying a moderate amount of weight, and the Wildcat shoe is most like a hiking boot, without all the weight.

While we often give out awards and Picks for gear, we won’t be for shoes. After testing many shoes and finding the right fit for each member of our team, we realized that a shoe is simply too subjective to unequivocally recommend to anyone.

Our advice is to know what brands of shoe fit you generally by trying them on in store, and then look for excellent models, which we review here. Look in our specifications table to see if the shoe generally fits wide, narrow, or standard-sized feet. There are a lot of differing elements among shoes, but this is the one that matters right off the bat.

Update: We tested the La Sportiva Wildcat in 2018. It has not received any major updates since testing, and remains a solid trail runner for hiking and backpacking.

The La Sportiva Wildcat has been one of my go-to hiking shoes for the last few years. They’re on the heavier side of the trail runner spectrum, but those extra few ounces are what makes them tough as nails. My boots don’t see much action these days because I prefer to take the lighter Wildcat whenever I head out to any rock-laden mountains. I haven’t taken them to the Rocky Mountains yet, but I promised my shoes that we’ll get there one day if they remain good little kitties.

Recently, I took a fresh pair of Wildcats to section hike a portion of the Pacific Crest Trail in Northern California. Leading up to (and during) my hike, lightning-sparked wildfires had been ravaging the western states, filling the hot August air with an oppressive amount of smoke. 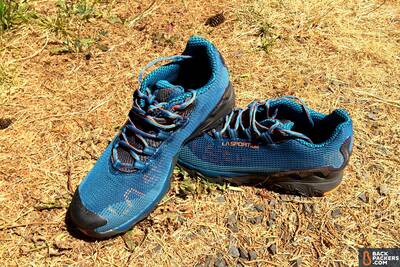 The limestone, granite, and metamorphic rocks of this region were sure to put even the hardiest shoes through the ringer, and I needed the Wildcat’s heavy-duty soles to survive the 23+ mile per day pace I had planned.

Climbing into Castle Crags State Park, I gained 5,500 feet of elevation over the first 30 miles of my hike. That’s a hell of a way to start a journey, especially with a pair of brand new shoes, but the Wildcat brought its A game. 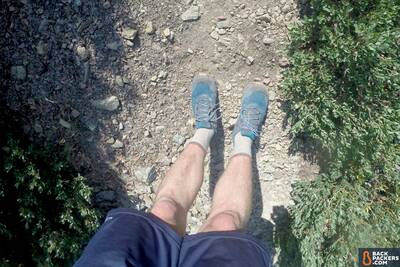 Uphill, stones, under weight – the Wildcat can handle it all.

This section of trail was an uphill slog over dust and granite stones. The grip of the Wildcat’s soles was superb, never allowing me to slip or slide, and the cushioning was thick enough to keep my delicate tootsies from feeling the sharp, pointed rocks.

I finished the initial uphill with plenty of body aches, but none on my feet. And that’s saying a lot! The best part was that I had climbed above the worst of the smoke. Talk about a breath of fresh air. 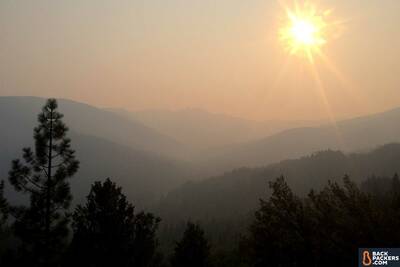 The Wildcat has a unique combination of stats: the stack height, or cushion, is 24 mm, which is low-to-moderate, and the shoes have a high heel drop of 10 mm, which means the toes of these shoes are about 14 mm thin. I appreciate the 10 mm drop as they suit my feet better, though it may be a bit much for some who prefers a flatter shoe. The cushion is also not extremely high, so be prepared to have strong feet. Yet, as I said, I found very little pain during my hike, so there’s something to this combination. 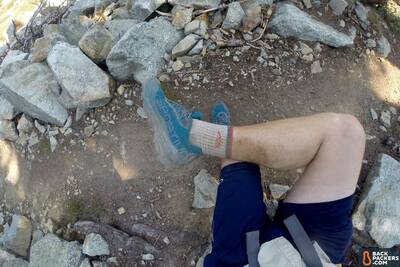 I walk on my toes whenever I’m climbing uphill, but I make a concerted effort to walk heel-to-toe when descending, otherwise I end up with aching knees. The high drop helps me walk properly and lessens the impact on my heels. What goes up must come down. That 30 mile uphill didn’t last forever (though it felt like it did!).

Finally, at roughly 12 ounces per shoe, the Wildcat is a pretty heavy trail runner. While it’s still lighter than boots and hiking shoes, you won’t get that “light as air” feeling that some running shoes give you. This, in the end, is about personal preference. 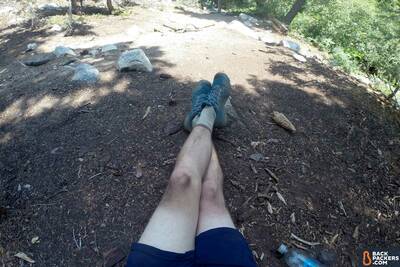 The La Sportiva Wildcats are wide and roomy for my not-so-wide feet, but the laces let you pull the all-in-one fabric upper as tight as you want, much like the drawstrings on a well-designed hood. My feet tend to swell on longer hiking excursions, so the adjustability this provided was appreciated, especially on the steep descents where my feet get crammed into the front of the shoes. 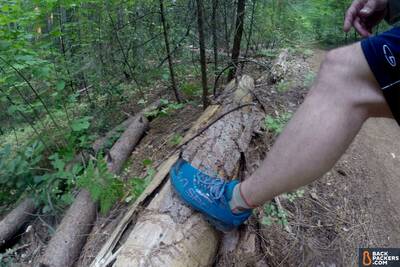 Fit is always going to be on a per-person basis, so trying the Wildcat on first is key.

If you’re considering this or other La Sportiva shoes, know that typically La Sportiva fits narrow or medium-sized feet, so the Wildcat is a little wider than other models.

After 100 hard miles, these shoes show almost no signs of wear. A bit of grip has worn off from the bottom of the sole, though nothing major, and the rest of the shoe is fully intact.

I have an older pair of Wildcats that I still use after recording 700+ miles on their odometer. The soles on those puppies are still in fair condition. The outer layer of honeycomb fabric has torn after some rough encounters with the elements, but they remain trail worthy and will conquer more ground before they’re done.

One of the outstanding traits of the La Sportiva Wildcat is its durability, so if you’re looking for a shoe that lasts, look here.

These shoes are tough, no doubt about it. La Sportiva’s proprietary jargon calls the sole a FriXion AT with Impact Brake System and X-Axis. Huh? Don’t overthink the technobabble.

Here’s the layman’s lowdown: I’ve walked in these shoes through desert sand and mountain streams, over jagged rocks and icy glaciers, and they’ve held on tight and lasted this long. The new pair I tested had the same expected build quality and durability. These shoes have not gone downhill over the years, figuratively speaking, though I have taken them down some hills, literally, of course. 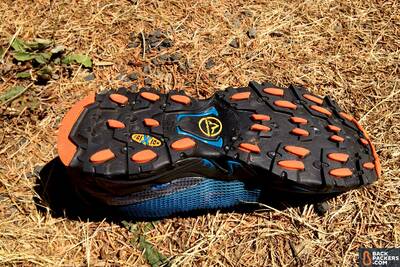 The La Sportiva Wildcat sole is burly and grippy.

The upper is all one piece, which is unique for trail runners, which are usually stitched together in a few places. This is great, but it means everything responds to how you tie your shoes. Tight or loose, it’s up to you. I’ve had the laces untie themselves, but a simple double-knot solves this issue. 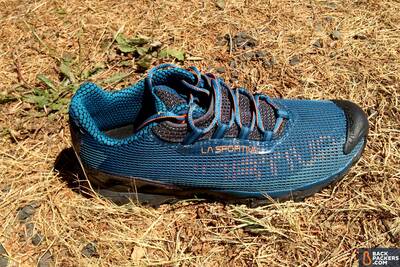 Honeycomb upper is a single piece construction, which looks cool, but also makes the shoe quite flexible around your foot.

The breathable honeycomb mesh that surrounds the shoe is surprisingly durable, providing an extra layer of protection that goes beyond your typical trail runner. Sticks and stones will have a difficult time breaking through, and the open gaps in the honeycomb help to keep your feet dry and cool.

Trail Running vs Backpacking and Hiking

Being that the Wildcat is heavier than most other trail runners I would choose another shoe if I was aiming for a high-mileage jog. They’ll weigh you down after a while. If, however, you find yourself aching for a jaunt through a field of volcanic rock or a valley of granite boulders, then the Wildcat’s strength would be worth the weight.

Trail runners have yet to solve the issue of dust and debris getting in-between your toes. The high-top, thick-walled nature of hiking boots prevents this from happening, but those of us who prefer lightweight footwear are stuck with grimy feet, or at best have to strap on gaiters to keep the dirt out.

The Wildcat is no better with this than any other trail runner I’ve worn. I carried extra socks on my hike knowing that I would have to wash them at least once a day to keep the grit from blistering my skin. Either prepare for this, or a wear a gaiter.

For all that weight they’re bearing and all those miles they’re walking, your feet deserve some love and support. The La Sportiva Wildcat will provide the cushion and strength your feet need to carry you over the rivers and through the woods to grandmother’s house, or wherever your destination lies.

Where to Buy La Sportiva Wildcat

We tested the La Sportiva Wildcat men’s trail running shoe. The same shoe is offered in a women’s model, and everything is the same except for cut and fit.

La Sportiva also offers the Wildcat GTX for men and women, which is the same shoe with a Gore-Tex liner added for waterproofing. This is great for those that are often in very wet environments, but folks typically want more breathability with a trail runner, and a waterproof liner inhibits breathability.

Arthur is Lead Editor of Backpackers.com. He loves to walk. It's as simple as that. He believes walking is the best way to experience the world. Thru-hiking the Pacific Crest Trail was his first backpacking foray, and he hasn't stopped since. Follow his adventures and stories on Instagram.