I love simple backpacking stoves. When I was a kid we toted around these ridiculous, many-pieced monstrosities that broke every other time we tried to cook something. So the first time I tried a canister stove (the original Pocket Rocket) was almost a religious experience. That stove quickly became the most popular canister stove on the market, and held that position for years. The MSR Pocket Rocket 2 is everything its older brother was and more.

This is one killer stove. It’s not only impressively small and light — 2.6 ounces, which is ultralight as far as I’m concerned– it’s easy to use (didn’t glance at the directions once) and boils water so fast that you better have your food ready to go the moment you light it. MSR is a highly respected gear manufacturer and the stove is reasonably priced for the quality you get.

For these reasons we’ve chosen the MSR Pocket Rocket 2 as the Classic Pick for the Ultralight Backpacker.

The MSR Pocket Rocket 2 is a reliable, powerful, incredibly compact backpacking stove. Weighing just 2.6 ounces it has a 3-minute boil time for a liter of water, simmers like a champ, and has pot stands that are easy to fold out (or in). The stove will fit just about anywhere in your pack, and will heat your meals or water with ease.

You can technically go lighter with a stove that has high-end materials, like the Snow Peak Litemax Titanium Stove, or with a different type of stove, like an alcohol stove. But we believe that most backpackers, even ultralight backpackers, want a reliable, powerful option that is also conventional. The Pocket Rocket 2 is tiny, weighs under three ounces, and is built to last.

Fan the flames of your curiosity by perusing our comprehensive stove guide, and see our MSR Pocket Rocket 2 review below.

Update: The Pocket Rocket 2 was released in 2017 to much acclaim. The stove has not changed and remains an excellent pick.

My maiden voyage with the Pocket Rocket 2 took place just below Kearsarge Pass in the Inyo National Forest and John Muir Wilderness. It had been a surprisingly long and chilly day and I was so hungry that I decided to make dinner before setting up my tent. 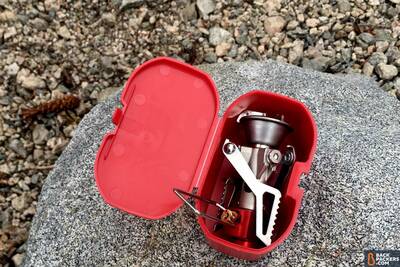 The Pocket Rocket 2 folds up into the included carrying case. The valve is sticking out in this picture, but it folds neatly under and out of the way.

I popped the stove out of its tiny carrying case, which I stored in my solo pot/cup. Yes, this is a stove that nests easily in almost any pot or mug. I unfurled the elongated pot supports (which have been updated in the Pocket Rocket 2 to be longer), twisted an isobutane gas canister onto it, and had water pleasantly roiling in less than 5 minutes. 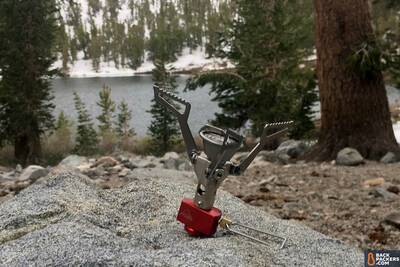 The Pocket Rocket 2 before it’s screwed into the canister.

I actually felt bad because I was done with my dinner before my buddy had even started. Icing on the cake: the Pocket Rocket 2 used so little gas that I’ve used that same canister on two subsequent trips!

Stable like your perfect cousin that double majored at MIT, wears khakis to all family functions, and volunteers at animal shelters in his free time. That is, stable for a canister stove. As with most canister stoves, you just screw the stove into the canister, then screw the canister into the dirt to make it level.

The Pocket Rocket 2 also features longer serrated pot supports than the original Pocket Rocket, which provides a nice cooking base. Plus the total height is fairly short, so you don’t get a tall and unwieldy port situation. 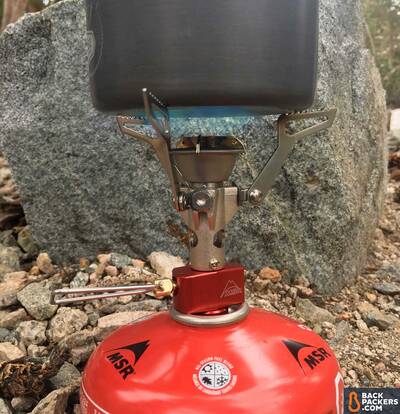 The pot is tall and narrow, and it fit on the arms of the stove easily.

That said, it’s a tiny stove. Don’t try to cook bacon on a 12-inch frying pan and then claim it’s “totally unstable.”

I’ve never needed to simmer when in the backcountry as freeze-dried food does the trick, but I did play with this feature and it appeared to work as described. The flame goes down to a simmer.

If you were filming Top Chef Sierra Nevada and attempting to make a pine needle reduction, this just might be the stove for you. 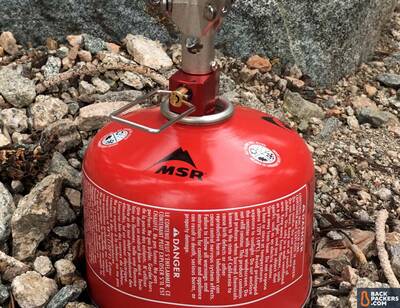 Turn the valve to get a simmer. A lot of small canister stoves struggle to simmer, but not the Pocket Rocket 2.

So easy I don’t even really know what else to say. Open the stove arms, screw onto gas the canister, light, turn the valve to your desired flame height, enjoy food, and laugh at your friend that has a more complicated cooking system. 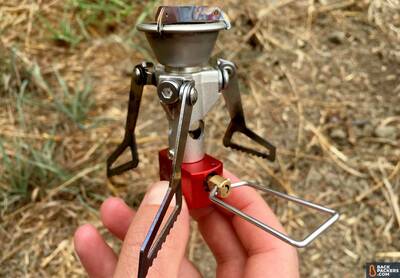 The only tricky bit is unfolding the arms. They take a second of figuring out, but beyond that you simply screw it in, twist the valve, and light.

I didn’t time it. My official excuse is that I was so hungry I forgot. However, I am positive the water was boiling in well under 5 minutes.

Editor’s Note: We tested the boil time in our backyard. A liter of water in a pot with a lid boiled in 2:48, which is about 10 seconds quicker than the claimed boil time by MSR. There was no wind, it was tested at sea level, the lid was on the whole time, and the valve was turned to high. If your conditions are different, the boil time will be a little slower.

I like this stove a lot — it’s functional, hearty, and tiny. With that said, I have two grievances that are worth considering.

First, the Pocket Rocket 2 doesn’t have a Piezo ignition. This is the self-lighting button that some stoves have. Not a deal breaker, but finding a match and hoping the flame doesn’t blow out as you light the stove are added steps that I prefer to avoid when I can. MSR also doesn’t offer a version with a Piezo ignition, so I can’t recommend you buy the $10 more expensive version, either. You can buy a separate Piezo wand, but that’s a whole other piece of gear to keep track of.

If there was a Piezo ignition, it would go near the red MSR logo.

Second, despite a new lip along the stove that was added to reduce the chances of wind being an issue, my stove blew out the very first time I used it. I have had other canister stoves that have never blown out. I was able to relight the Pocket Rocket 2 and finish boiling the water without further complications, but this did not stoke my embers at all.

The separated burner head and lip is supposed to provide wind protection. While it works to a degree, the stove did blow out once during use.

Make sure you have some form of wind-proofing, whether it’s a rock outcropping or your own body.

The MSR Pocket Rocket 1 has been the stove standard bearer for years, and the Pocket Rocket 2 is even better. Easy, fast, reliable, and ultralight. Hot food in my belly!

Where to Buy MSR Pocket Rocket 2 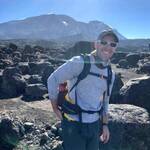 Josh Mathe is passionate about squeezing every last drop from life, and helping others do the same. He is the best-selling and award-winning author of "I, Athlete" and "In the Footsteps of Greatness", as well as a speaker, fitness expert, nutritionist, ultra endurance athlete, and life adventurer. Josh is the owner of One10 Performance & Nutrition, and when not in office he spends his days in the mountains moving as fast and light as possible. Josh holds a Master’s of Science in Human Nutrition, and is a certified sports nutritionist (CISSN), Performance Enhancement Specialist (PES), and endurance coach. He lives in Sacramento, CA with his wife and three crazy animals. For more information or to contact Josh directly, please visit his website.