Hiking in the pitch black has a certain eerie feeling to it. The sense of adventure is extreme, and you’ll need a light to make sure you don’t fall off a cliff or whack into a tree. A headlamp usually does the trick, and a tiny headlamp with a bright enough light is the best scenario for most backpackers.

The Princeton Tec Byte headlamp fills those shoes. Coming in at 2.2 oz., you can fully experience hiking in the dark without the fear of stumbling off a cliff thanks to the modest (yet bright!) 70 lumens. There’s also a low white light and red light for around camp use, a battery lock, and a five-year warranty (rare for an electronic product), all for $22.95.

These attributes make the Princeton Tec Byte headlamp our Budget Pick for the Ultralight Backpacker and Wilderness Backpacker.

The Princeton Tec Byte is a small, practical headlamp at an introductory cost. With it you get 100 lumens in a 2.2 ounce package, a bright white spot LED and a red light. All that you need for finding your way around camp at night, all for less than $25.

The Byte’s size and multiple light modes make it excellent for backpacking excursions. You often don’t need a ton of light, but rather one that is comfortable and functions at night in and around a tent. If you want a much brighter headlamp that weighs a bit more and doesn’t have the red light, yet costs a little less, consider the Petzl Tikkina.

To learn more about the dark and mysterious world of headlamps, check out our comprehensive guide. For the full review of the Princeton Tec Byte headlamp read on.

Update: We reviewed the Princeton Tec Byte in 2017. This is a staple model for PTEC and since then they have released one update to the Byte, namely giving it 100 lumens instead of 70. We find this upgrade to help improve its usefulness around camp and when looking for a trail, but otherwise the light is pretty much the same.

Waking up at 4 a.m. to hike 4,000 stairs isn’t something I do often, but after hearing about the “Stairway to Heaven” hike I decided it was time to check it out. I’ve lived in Hawai’i for a month now, and “heaven” out here must look pretty good. We were heading up there to catch the sunrise and camp. I packed my bag, including my stove, hammock, rain jacket, and the Princeton Tec Byte headlamp. 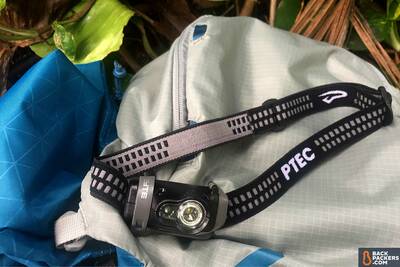 Getting ready to hit the trail.

We arrived at the trailhead at 5 a.m. and started towards the daunting stairway – although I couldn’t see it because it was still dark. I could feel the high mountain towering above us as we got closer. Throwing on the Byte, I turned it onto the highest setting. As we continued uphill for the next hour, it started to rain (it rains about every other minute in Hawaii) and the Byte proved to light up the trail. It wasn’t a blinding beacon, but it was enough to provide me safe passage to the top, and it worked through the drizzle. Keep in mind these were steps and a well-worn trail. If I was bushwhacking off trail, 70 lumens would not have been enough.

We reached the top and I switched the Byte to the lower white light setting with an easy push of a button. The lower light was really useful in this pre-dawn, post-hike stage — it provided enough light to see the people around me, but not so much that I was blinding everyone. 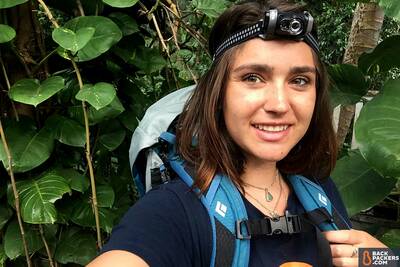 There were two revelatory moments for the Princeton Tec Byte.

The first, and what has really sold me, is the comfort level. Once the sun came up over the horizon on that epic trek, I took off the Byte and was surprised that after wearing it for about two hours, it hadn’t caused any headache or pain. The strap was easy to adjust and flexible enough to provide comfort during those grueling 4,000 steps.

Part of this is that the headband is stretchy and easy to adjust. Once I found a good fit, I forgot anything was strapped to my head. It didn’t bounce or move around, either. The second part is the weight — 2.2 ounces feels like nothing, whereas a more traditional headlamp is about four or five ounces, and after many hours you feel it. 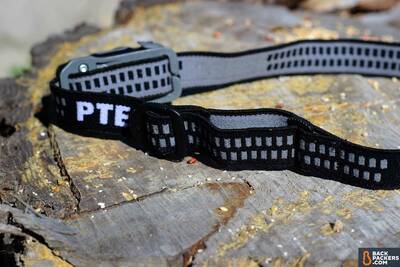 A comfy, removable headband made for an easy hiking experience. Two AAA batteries makes for an extremely light headlamp.

The second moment was reflecting on the quality of headlamp. I figured that, due to the price, it wouldn’t work as well as a more expensive headlamp. Sure, it’s not as bright as other models, but I was able to hike in that blue, pre-dawn darkness and toggle to red or lower white light in a second. For under $25 that’s a pretty sweet deal.

The Princeton Tec Byte has a simple, efficient design that met my basic backpacking needs. The low weight was excellent, and 70 lumens was enough for basic hiking in the dark.  Beyond those two things, which are the major specs of this headlamp, the Byte has a few other features.

The light itself can swivel up or down and is easy to adjust with one hand, which makes dialing in an angle simple. It holds the individual positions well, too.

One of the ways the Byte stays so light is that it takes two AAA batteries. A lot of headlamps use three AAAs which definitely adds weight to your lamp and to your pack if you carry extra (and you definitely should). As I started a second trip with the headlamp, I realized I needed to change out the batteries, and it was easy to do on the trail. You just pop open the side of the headlamp, empty the batteries, and put new ones in. There was no need for a screwdriver or any extra equipment. 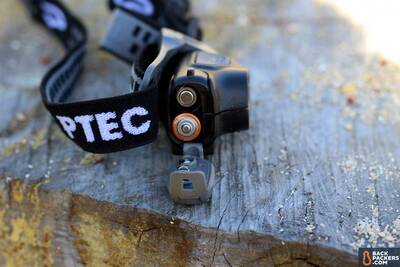 In the same battery enclosure is a battery lock, which can be switched on to make sure the headlamp doesn’t accidentally get turned on. This is a critical feature for backpackers. There’s nothing worse than a dead headlamp after getting to camp because it was shining like a disco light the whole way out. 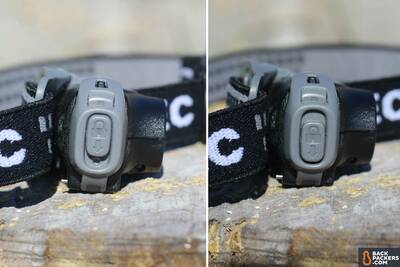 This basic battery lock keeps your batteries from dying. Necessary for backpackers.

Finally, the Princeton Tec Byte has a water resistant rating of IPX4. Although it’s not waterproof, the first time I used it, I got caught in a rainstorm. The headlamp got wet in a number of rainstorms and it didn’t cause any issues. Although I wouldn’t recommend dunking it in the ocean and diving with it (definitely don’t do that), I felt comfortable using it in a light rain.

Wearing the Princeton Tec Byte was comparable to wearing a soft beanie. It didn’t provide any warmth, but was cozy in its own way. The band felt loose enough that it didn’t cause any pain, but it was tight enough that it wouldn’t slip off.

I would be comfortable taking this on any trips and am confident it would last under normal wear and tear, as long as you treat it well. The Byte doesn’t need dinner and a movie, but don’t go banging into every tree you pass. I also find comfort in the fact that Princeton Tec has a five year warranty on this product, which is unique, because this is an electronic product, and electronics have a bad habit of failing.

Going from the highest setting to the lowest setting of light, I realized that for the most part I would use the highest setting most frequently. Seventy lumens was enough to climb stairs, hike, and look at objects around camp when packing or setting up the tent. The softer white light and red light were great for in-tent activities, but too dim to see much else. 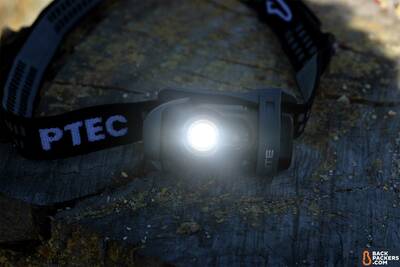 I will say that 70 lumens is a lot less than other backpacking headlamps (like the Black Diamond Spot, Black Diamond ReVolt, or the ZebraLight H52w), so think about how much light you really need.

Princeton Tec lists the “burn time” of the Byte at 146 hours, but that’s at the lowest light setting. However, the battery was close to done after my two and half hour hike, so on the brightest setting (which I used most) it doesn’t last all that long.

Throwing on this headlamp made me feel like the backpacking equivalent of Warren Miller skiing down the slopes of Utah. There was no question of whether I looked cool, I had the style of a true backpacker. 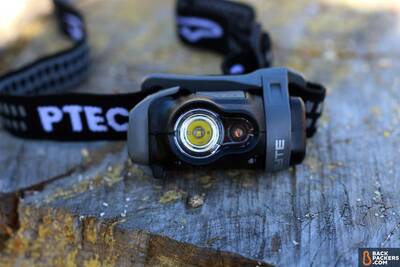 Knowing this is a Budget Pick, I would say my only grievance with the Princeton Tec Byte is the battery life. I replaced the batteries after my dawn hike for another trip, and just a few hours into that I started to see that the light was fading. I would probably have to replace them again. I was using it on the high setting, so if you used the lower light setting more it would last a lot longer.

Part of this is the fact that it only has two AAA batteries in it, so the overall battery time is going to be less than a headlamp that has more batteries. But it also felt like it was draining them pretty quickly. I’d look at getting rechargeable batteries for this headlamp so I don’t burn through a bunch of Alkaline ones.

Also, make sure to use the battery lock, because if you don’t the batteries will drain a bit even while the headlamp is off.

Bright enough, ultralight, and basic in its design, the Princeton Tec Byte headlamp is an excellent budget choice for non-technical backpacking trips.

Where to Buy Princeton Tec Byte 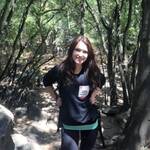 Backpacking since she was a young girl, Micaela is addicted to testing her mental limits and physical strength in the wild. She’s a resident ultralight gear-junky at Backpackers.com, and wants to help others reach their full potential in nature. In between treks, she studies electrical engineering and goes free-diving with dolphins near her Hawaii home. You can follow her adventures on Instagram.