Are you someone who loves filtering water? If so, would you like to accompany me on my next trip? Because I hate filtering water. In fact, I would go so far as to say that nobody I’ve ever hiked with enjoys filtering water. It’s just one of those annoying tasks that needs to be done in order to survive. Unless you’re a human cactus, in which case, good for you.

The Sawyer Squeeze might be the next best thing to evolving into a human-cactus hybrid. This small, lightweight, and effective little tool completely changed my outlook on what it takes to filter water in the backcountry. No more big messy set ups weighing you down and no funky tasting tablets infusing your water with chemicals.

We’re recommending the Sawyer Squeeze as our Budget Pick for the Wilderness Backpacker because of its low price tag, ease of use, and and long lifespan.

The Sawyer Squeeze water filter has become one of the go-to basic water filters for backpacking, especially thru-hiking. You can use the included pouch or a disposable water bottle to store water, then filter straight into your mouth for clean, easy drinking water. While it can clog occasionally, and doesn’t filter well for large groups, at 3 ounces and $40, you’ll be hard pressed to find something as small and handy on the trail (unless it’s the MINI, the smaller, cheaper brother, which is best for truly ultralight backpacking.)

If you want an even cheaper filter, consider the Sawyer Mini. The Mini is essentially the Sawyer’s little sister — it’s smaller, weighs less, and doesn’t have as good a flow rate as the Squeeze. Ultralight backpackers like the Mini because of its weight, but regular backpackers will appreciate the flow rate of the Squeeze enough to make it worth the extra $15 and 1 ounce of extra weight.

Get the skinny on the different types of water filters and purifiers, what the difference is, and how to choose a water filter in our comprehensive guide. To read the full gear review of the Sawyer Squeeze, just scroll below.

I strolled through Domelands Wilderness feeling like a Disney princess. The excitement of new trails and adventure was in the air — all around me woodland creatures went about their merry way and the hills were literally flowing with streams and creeks. The plan for the long weekend was to hike low mileage, camp near a water source each night, and generally take in the views of a little-visited California wilderness area. 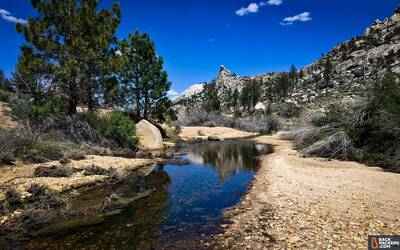 However, by the second half of our “easy 10 mile day” I was feeling less like Cinderella and more like Simba during that scary part of The Lion King where he has to wander through the desert. The idyllic mountain streams evaporated as we lost elevation, and my charming chipmunk friends were replaced by ominous bear tracks on a dusty faint trail. Still, I knew we’d be fine. The valley we were dropping into lost nearly 2,000 feet of elevation and was home to the Kern river, which was running high with spring melt.

As soon as I saw that river I knew the Sawyer Squeeze was about to get put to the test. The Kern was flowing high, fast, and brown. Really muddy, really dark, and really brown. 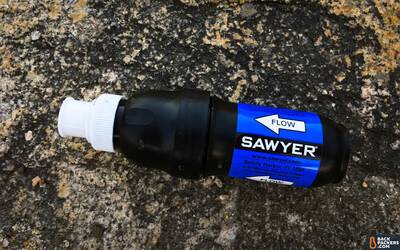 We stepped over downed logs and through dense willow bushes as we made our way to the shore of the river. Up close the water didn’t look as murky as it had from afar, however it conjured up images of black tea more than fresh river water. 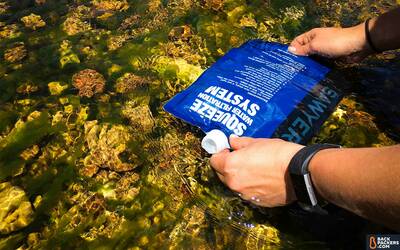 A 64 oz. pouch dunking in the river. It may look clear in this photo, but it wasn’t. Trust me.

Squatting on the bank of the Kern river, in the mud next to freshly laid bear tracks, I quickly filled the 64-ounce pouch that comes with the Sawyer Squeeze Plus (not the Regular version). I screwed the Squeeze filter onto the pouch, tipped the spout into my water bottle, and squeezed. (In case you’re wondering, that’s how they came up with the name!)

The stream of fresh filtered water flowed out mercifully clear! I knew that Sawyer prides itself on filtering both bacterial and particulate matter from water, but I had yet to test their filters on anything but clear creek water. 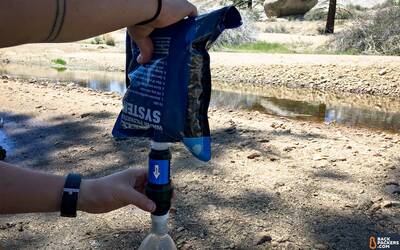 Furthermore, the increased flow of the Sawyer Squeeze and the 64-ounce water pouch made filling my 2-liter bottles a total breeze. Until this trip I had only used the Sawyer Mini. It is a fantastic product (and very similar to the Squeeze), but has a noticeably lower flow rate. It can feel frustratingly slow when you’re tired at the end of the day and just want to get into camp. Even better, the Sawyer Squeeze took a fraction of the time of a traditional pump-style filter and we could even use the filtering pouch as a means of toting more water back to camp.

The Sawyer Squeeze itself is basic as it gets, and I love that about this product. One end receives water, the middle filters it, and it comes out the end. Boom. Done. There’s a pop cap that lets the water out as well as a handful of accessories that come with the Squeeze, which I’ll detail below, in addition to specifics about its use. For me, being a wilderness backpacker is not only about getting the lightest and most effective gear, it’s also about picking gear that won’t break and isn’t needlessly complicated, and the Squeeze excels in both of those aspects. 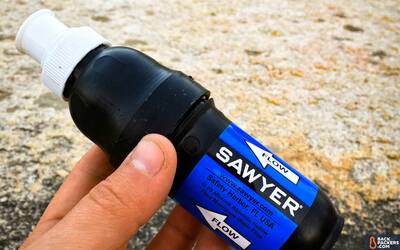 The filter. Water goes in one end, out the other. Pretty simple.

Squatting on the side of a muddy river, surrounded by bear tracks, during the last moments of daylight is not the time to discover you don’t know how to use your filter. However, the Sawyer Squeeze is so incredibly simple that even first-time users should have no problems. Additionally, if you’re someone who likes reading instruction manuals, the Sawyer Squeeze provides instructions for both use and cleaning right on the water pouch!

Use the included pouch to scoop dirty water. Attach the pouch threads to the Squeeze unit. Then either squeeze the water into your water bottle, a hydration bladder, or your open mouth. 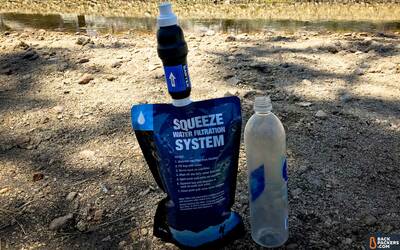 Simply screw the filter on the bag (or the bottle), and squeeze. And yes, those are instructions on the bag. The backside has backflushing instructions.

The filter itself feels very durable and sturdy. Short of running it over with your Subaru Forester, the Sawyer Squeeze is going to last you a long time. There are no moving parts, so the only real concern is using it in sub-freezing temperatures because the fibers can freeze.

The water pouch, however, is where I fear the issue will develop. The pouch is made of a tough plastic, but even after only a handful of uses this bag started to develop seams where I had folded the bag over to squeeze the water out. While none of these seams have sprung a leak just yet, I can definitely anticipate it being an issue in the future.

The Sawyer Squeeze works with the included pouch, or any Smartwater Bottle (and a few other disposable plastic bottles as well). It just screws on, and you can filter as you drink. It can also be rigged as a gravity filter or to sit inline with your hydration bladder, though this takes a bit more work.

The Sawyer Squeeze comes with two pouches, a syringe for cleaning the filter, as well as accessories for using the filter in-line with a bladder or as a gravity filtration system. You can even screw the filter directly to the top of your water bottle and drink through the nozzle.

For most weekend adventures a single pouch and the filter will do, making this set up incredibly easy and light. For longer trips, or trips with long water carries, I’d suggest bringing the cleaning syringe and pouch cap, which probably adds a whopping ounce.

As we learned while attempting to frantically filter water while checking over our shoulders for bears, the Sawyer Squeeze will filter a liter of water in about a minute. However, if you’re filtering tea-colored or muddy water, the filtration rate will slow noticeably on subsequent uses. This is a good indicator that your filter is in need of a cleaning, which you can do in the field with the provided injection syringe. 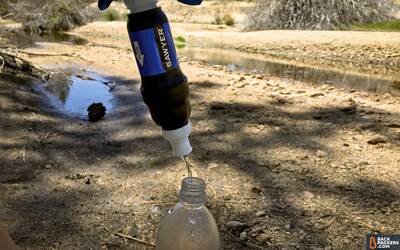 The flow on the Squeeze won’t blow your mind, but it’s pretty fast. About a liter per minute.

The only real issue that I take with the Sawyer Squeeze is that I fear the water pouch will eventually spring a leak. However, on their site Sawyer is quick to point out that their pouches are made of Mylar foil and will last hundreds of uses, so maybe I’m worrying over nothing. 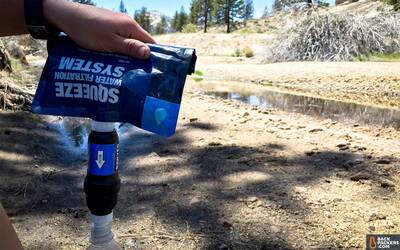 These Mylar foil bags may not hold up over time. Many people swap them out after a while for something more durable, like a water bottle.

While I personally find the process of squeezing my water through the filter easy, and (dare I say it), kind of fun, some people have a distinct dislike for this type of filtration system. If you fall into the anti-squeeze camp, we suggest checking out our review of the SteriPen Adventurer Opti, a really simple UV filter.

The Sawyer Squeeze takes the chore of filtering water and turns it into a quick and easy process. One that you can easily accomplish before being eaten by a bear whose prints you followed to your water source.

We tested the Sawyer Squeeze Water Filtration System (sometimes know as the “Plus” system). This comes with the filter, two 64 ounce bags, one 16 ounce bag, inline adaptors, a gravity tube, a carrying case, and a cleaning syringe and gasket. The “system” is also offered in a Regular version, which has two 32 ounce bags and no cleaning gasket. Sawyer sells the bags separately and individual pieces of this set separately. It also sells the “All in One Water Filtration System”, which is the normal system with a bunch of add-ons.

In general, we think a backpacker will find the best value in the Sawyer Squeeze Water Filter System. This is the one with less stuff than what we tested. While the extra-large bags were nice, it wasn’t worth the extra $10, as you will probably end up using one bag and a water bottle. The Sawyer Squeeze kit we recommend retails for $39.95 — and that starting price is the best way to know which kit you’re purchasing. 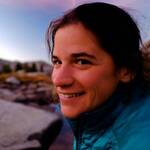