The Coleman Triton Stove Series 2 Burner played a pivotal role in the creation of much of my recent outdoor cuisine.

One of my favorite outdoor experiences is sizzling up a hot meal as the sun sets, especially when I’m able to share that tasty trailside dinner with other adventurers. It’s a task I take pride in. Cooking outside over an open flame conjures up an ancient, primal sense of accomplishment from deep within. Never mind that I came fully prepared with several cans of propane and a BIC lighter — I still feel like I’m Arthur “Master of the Flame” McMahon when I’m manning the picnic table stovetop.

The Triton’s he dual burners each pump out 11,000 BTUs of power, and they can boil water at full blast or be dialed down for simmering. The Triton stove is widely available and uses standard propane fuel canisters. For about $80 this stove comes with two adjustable burners, a slim profile for easy storing, and wind guards.

Coleman has been a reputable name in camp stoves for ages and the Triton stove has proven to be as reliable as they come, which is why we’re awarding it our Classic Pick for the Car Camper.

The Coleman Triton Stove has two burners, sets up in seconds, has built-in wind blockers, and closes up as a carrying case. While it’s not the best camping simmer out there, it can cook at near-gourmet levels, and is built like a tank.

Interested in a camping stove? You can see how the Coleman Triton Stove compares to other stoves, and learn how to pick the right camping stove for you.

The Coleman Triton stove was my kitchen away from home for a 2,000 mile road trip through Oregon, Nevada, and California where my wife and I visited several National Parks and Monuments. Every breakfast and dinner we had during those two weeks was cooked on the Triton’s two burners. Ravioli were boiled to perfection, eggs were made over easy, and sloppy joes were simmered for exactly 30 minutes as per the rules of my mama’s secret recipe. 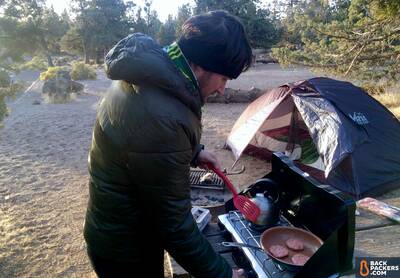 The small size and weight of the Triton stove made for easy storage and carrying. It sat flush on any flat surface, the propane attachment screwed in securely, and the wind guards slid into place with ease, giving me confidence in its stability so that I could focus on the food I was about to cook. 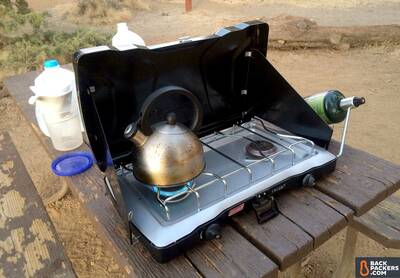 Easy to setup, use, and cook.

The stove worked, which allowed us to think relatively little about it, and get down to eating.

The Triton stove can comfortably hold a 12-inch pan and 10-inch next to each other, and its frame will support a fair amount of weight. I had a hefty pot of boiling pasta on one burner and a pan full of searing chicken legs on the other without any issues. That doesn’t mean you should try to sit on it (nobody wants that kind of toasty buns!), and it still needs a flat surface to function this well. Campsite picnic tables are highly recommended. 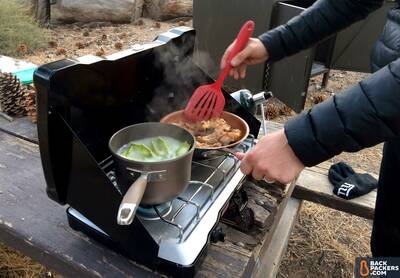 As long as you have a flat surface, this stove is solid. It also can fit two pans side by side easily.

Full blast is the default on this stove — it wants to fry your chicken in record time. The temperature dials are sensitive at the lower end, which means simmering takes a little finesse, but it’s definitely possible. 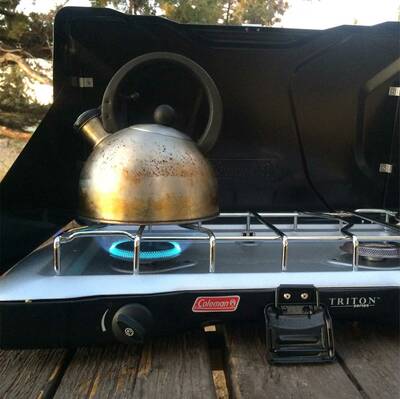 The Triton stove can simmer, but it wants to be a full-blast flame. You’ll have to control the dial sensitively to get it to simmer.

I was able to reduce the flame to make over easy eggs, which will never be possible over a roaring fire. Not the best simmerer on the market, but definitely able.

Opening up the stove and putting it together was a snap. The propane can twists into place securely and rests right next to the stove on the table. You do have to provide your own spark, so make sure to bring a lighter. If you prefer an automatic Piezo lighter then you can spring the extra $20 to grab the Coleman Triton InstaStart. 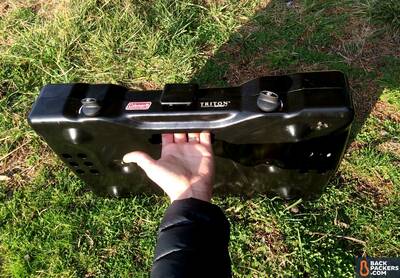 The Triton stove has a built-in handle for easy carrying.

On average it took around four minutes to get a couple cups of water to boil, but on windy days that was sometimes doubled. The wind guards on the Triton have an adjustable width, which is an uncommon feature on camping stoves, and this is great for making a bit of extra space for larger pans, but it also allows in more wind to steal away the heat of your flames.

The wind flaps area easy to assemble. While they do aid in wind protection, they could be larger.

As I mentioned, the temperature dials are a little finicky when you’re going for a gentle simmer. There is a very tight window between the heat strength of an industrial furnace and no-flames-at-all where the perfect simmer resides. It’s all too easy to shut off the burner by accident. I got used to its sensitivity after awhile, but it was annoying when I had to grab my lighter and reignite the flame.

As the successor to the tried-and-true Coleman Camp Stove, the Coleman Triton Stove Series 2 Burner has some serious reputation to uphold. Fortunately it’s a hardy piece of equipment that is capable of cooking a damn good meal and will be a great centerpiece in your car camping outdoor kitchen.

Where to Buy Coleman Triton Stove

We tested the Coleman Triton Stove Series 2 Burner — sometimes called the Coleman Triton Series 2-Burner Stove. It’s a camp staple and can be found in many outdoor stores and online retailers. There is also a version that costs roughly $20 more, the Coleman Triton InstaStart, and comes with a Piezo ignition. We like both stoves, and think it really depends if you prefer an automatic ignition or not.

Arthur is Lead Editor of Backpackers.com. He loves to walk. It's as simple as that. He believes walking is the best way to experience the world. Thru-hiking the Pacific Crest Trail was his first backpacking foray, and he hasn't stopped since. Follow his personal adventures and stories at betterhiker.com and on Instagram.