The Salomon Quest 4D 3 GTX hiking boots have been a top choice for backpackers for many years and through many iterations. The Quest 4D 3 GTX is the newest iteration, and has taken some queues from the Salomon trail running lineup, such as the ortholite insole and Contragrip rubber compound, which provides absolutely bomber traction for any trail condition.

While we don’t award Picks for footwear, the Salmon Quest 4D GTX 3 is likely the model you want to check out first if you’re in need of a true backpacking boot and chomping at the bit to crush miles, so those Wilderness and Ultralight Backpackers should look here. Salomon’s fit is decidedly narrow, so keep that in mind.

The Salomon Quest 4D 3 GTX’s are burly, big, and built to take you far under a heavy load. Yet these boots feel comfortable right out of the box and required a zero break-in period. They’re also waterproof and feature a thoughtful lacing system that works well on steep incline and under stormy skies.

Living in the high Rockies of Colorado, I truly am spoiled when it comes to trails, terrain, altitude, and climate. So, you may be asking yourself, “Well golly gee Jon, where might you take a fresh pair of boots to test if you have so many places to chose from? I must know!”

Calm down, I’ll tell you.

An hour away from our home there’s a wonderful circuit commonly referred to as the Decalibron. That is hiker speak for Democrat, Cameron, Lincoln, and Bross, all giant chossy rock piles that soar well over 14,000 feet. The air is thin, the terrain crumbly and loose. A good portion of the hiking involves class two scrambling and unstable rock, with a slight chance of mountain goats. Sadly, there were no goats on this day. 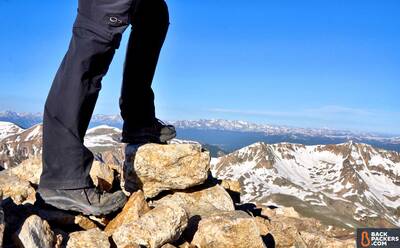 Getting to the top in the Salomon Quest 4D 3 GTX. Yeah, they look good.

At 5:00 a.m. on a Sunday morning I laced up the Salomon Quest 4D 3 GTX boots, ate a pretty tasty Epic Bar, and readied myself for a seven mile, 3500-foot vertical gain adventure.

I’ve been in the process of training for a larger backpacking trip, so I’ve been loading up my daypack with close to forty pounds of crap and hitting a number of trails. The terrain fluctuates between dirt singletrack, small boulders strewn about the road, creek crossings, and loose scree, and the elevation rises and falls between 8,000 and 11,000 feet. As a rule, I’m unstable at best, extreme klutz at the worst, and the high altitude air does me no favors. 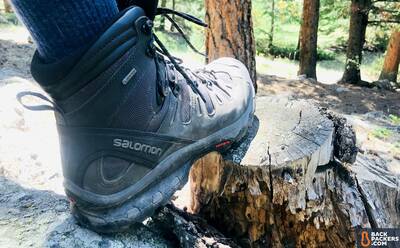 The boot, a mix of nubuck leather, nylon, and the rugged Contragrip outsole.

I found the Quest 4D 3 GTX boots to excel in all of these conditions, especially with a heavy pack. And my inability to balance, especially on such loose terrain, was not an issue for the soles. The only thing I haven’t tested them on has been a nice bed of pine needles that you’ll find in lower elevation forests, but if they handle the rock and scree with aplomb, you can bet they’ll be great on the softer stuff too.

When we returned to the trailhead after five hours of hiking, I’m not sure if it was the urgency in which I had to relieve myself, but, remarkably, my feet felt pretty damn good.

This was the first real hike I had taken the Salomon Quest 4D 3 GTX’s on, so they were fresh out of the box. Despite hiking for hours on loose boulders and terrain so crumbly there wasn’t an easy, level, step, my dogs were not barking. This is pretty impressive because I’ve been known to complain about my feet while waiting in line to check out at Costco. 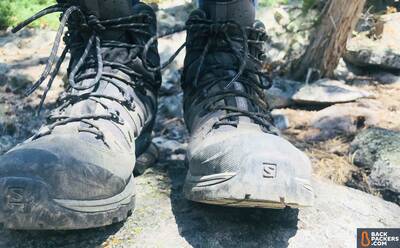 The Quest 4D 3 GTX boots with some dirt!

The Salomon Quest 4D 3 GTX is a premier, fully featured boot, so there’s a lot to dig into.

One of the first features you’ll notice is the lacing system. In the past I’ve had difficulty keeping tension in the right places with mid-height hiking boots, but the Quest 4D 3 GTX has solved this for me. Right near the ankle there’s a nice, deep-set eyelet to ensure you get extremely secure tension across the forefoot. 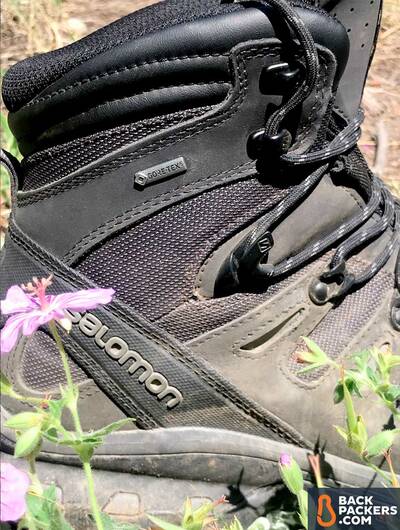 Flower aside, the deep-set eyelet at the ankle provides a great deal of support and comfort.

The tread and rubber compound of the Quest 4D 3 GTX is stellar. If you’re already a fan of Salomon trail runners you would be accustomed to tremendous traction in all types of terrain — this legendary Contragrip traction extends to the Quest. It’s a huge plus for these hiking boots.

This is the second piece of footwear I’ve used with this specific outsole and it truly excels in tough conditions. It uses fairly aggressive lugs that still don’t protrude so far that walking on regular surfaces is uncomfortable. I felt sure-footed during mile-plus steep descents of rotten scree and talus. No matter how heavy my pack is I feel extremely ready to walk through any situation. 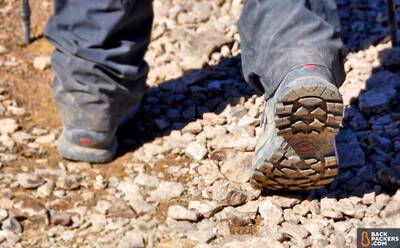 The Contragrip outsole has deep lugs, tons of grip, and can take a beating.

The Salomon Quest 4D 3 GTX boots are supremely comfortable right out of the box. For this particular hike I had on a pair of Darn Tough mountaineering socks and the boots coped pretty well with the thick wool sock. I haven’t found my feet overheating yet, though I hike almost entirely above 10,000 feet, so if you hike at lower elevations you could run into this issue.

While sturdily built and confidence inspiring, I’ve noticed a few nicks and bruises on the boots after spending many hours above treeline. These issues are truly only cosmetic at this point. The Quest 4D 3 GTX’s are reinforced with a hefty rand that wraps up around the toe and this feature has been a great asset. I have had issues with other boots catching on boulders and slowly tearing the rand, but these boots are holding strong.

I actually found myself nearly falling due to the super sticky heel catching on some boulders. (A good thing, I promise). Our descent route was just as loose, maybe even looser, than the ascent. I never felt the ground moving from underneath my boot, unless the ground itself decided to move, which it often did. From boulder hopping, hiking on scree and talus, crossing creeks on wet rock, and just about anything in between, I felt sure footed and confident my foot would stay where I placed it.

Splendidly comfortable, breathable, and waterproof. To start our hike, there was a pretty deep creek crossing literally 100 feet from the car. Water didn’t seep in through any seams or through the tongue and my feet stayed dry for the duration of the hike, after several more deep water crossings. The Quest 4D 3 GTX’s easily shed the melting snow later in the day and were dry by the time I got back to the car. 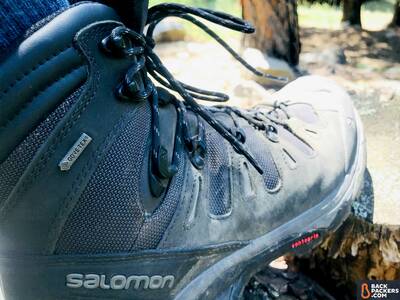 A closeup of the uppers.

I’ve got a pretty narrow foot and the standard sizing fit like a glove. Not really much to say on this. I go a half size up in my hiking footwear to accomodate a larger sock and to allow some room for foot swelling. This strategy continues to work well in this boot.

It’s pretty hard to find negatives with this boot, so i’ll channel my inner old fart and do my best to nit pick. Get off my lawn you damn kids!

If you have gotten used to hiking in trail runners, you may find these boots fairly heavy. While there are heavier boots on the market, at 22.5 ounces per shoe, the Quest 4D 3 GTX isn’t winning any awards for its feather-like weight.

It’s a burly hiker in both weight and size. When you slide your foot in you can immediately notice that there is a LOT of boot to deal with. This never affected foot placement, but I also haven’t had a lot of really long days where fatigue would become a factor, and a heavy boot does increase that potentiality.

But hey, if you’re a weight weenie you probably aren’t looking at this boot anyway, so go ahead and carve your own pair of sandals out of used tires and stop complaining that these boots are too heavy.

Salomon’s long pedigree of creating excellent footwear is immediately apparent when you slip on the Quest 4D 3 GTX boots. Lace ‘em up tight, don your favorite pack, and get ready to crush serious miles in major comfort.

We tested and reviewed the men’s Salomon Quest 4D 3 GTX hiking boot. The same boot is offered in a Women’s version, and all materials are the same, but fit is different. This boot is the next in line after the uber popular Quest 4D 2 GTX, and we feel that Salomon has only increased the comfort and grip.

They do not offer this boot in other widths, and there are no other models (like one without waterproofing). 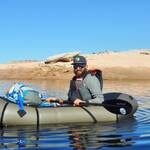 Hi, I’m Jon Rosenberg! I’m a mountain runner, entrepreneur, mountain lover, and enthusiast for just about all things outdoors. I’m based in beautiful Pagosa Springs, Colorado at the foot of the incredibly rugged San Juan Mountains. You can find me running single-track trails above treeline or backpacking the Colorado Trail. Gear is my thing. I even own my own gear company!